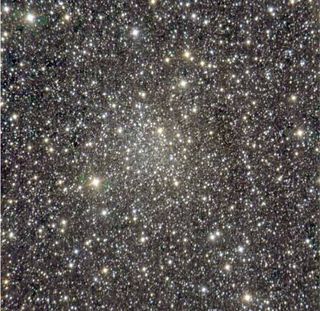 Color-composite image of FSR 1735. The cluster is the circular regions of stars and enhanced brightness in the center of the image. North is up and East is to the left.
(Image: © Henri Boffin, ESO)

Astronomers are mapping more than 40 million stars in the sky, recording the brightness and location of many faint stars that will be catalogued accurately for the first time, researchers say.

The stars are being charted as part of the American Association of Variable Star Observers Photometric All-Sky Survey (APASS), which is scanning the sky at a level 100 times fainter than any previous star-mapping expedition.

"Prior surveys have done a good job measuring the brightness of bright stars," Arne Henden, director of the American Association of Variable Star Observers (AAVSO), said in a statement. "Other organizations have announced plans to measure faint stars. But this goldilocks zone of stars that are neither too bright or too faint has been neglected, until now."

In some cases, the luminosity and locations of millions of these stars are being precisely noted for the first time, the astronomers said.

"This catalog of stars will serve a key link between existing bright catalogs and fainter catalogs planned for the future, such as those created by Pan-STARRS and the LSST observatories," said Doug Welch, a professor of physics and astronomy at McMaster University in Hamilton, Ontario in Canada. [Stunning Photos of Our Milky Way Galaxy]

The survey will measure a range of stars whose brightness can typically be seen by amateur stargazers using backyard telescopes, AAVSO officials said. Astronomers measure the brightness of celestial objects in terms of their "magnitude," which characterizes how luminous they appear in the night sky.

In its simplest definition, the lower the magnitude of a star or object, the brighter it appears in the sky.

The APASS survey will catalog stars ranging from magnitude 10 to 16.5. For comparison, the faintest stars that can be seen with the naked eye are about 6th magnitude, and 11th magnitude stars are only 1/100th as bright, the researchers said.

"We estimate nearly all of the stars mapped in this survey will be accurately measured for their first time in their history," Henden said. "Tens of thousands of these stars will likely change in brightness over time and need follow up monitoring by amateur astronomers."

The APASS star catalog is expected to give astronomers a more accurate census of the sky, which could help narrow down future searches for intriguing celestial targets.

"Time available for imaging targets on the largest telescopes will be increased by APASS since calibrated stars will exist on the target images themselves," Welch said. "Different pointings for calibration fields won't be necessary."

The map is being put together using data from 8-inch (20-centimeter) telescopes in New Mexico and Chile. The telescopes can cover up to 1,000 square degrees each night, and are snapping pictures of the sky through five colored filters. Using different color filters will make it easier for individual astronomers to combine data from the APASS catalog with their own observations of a star, the survey team members said.

The APASS survey began in 2009 and is expected to wrap up by 2014. Early science data is available to the public online at http://www.aavso.org/apass.