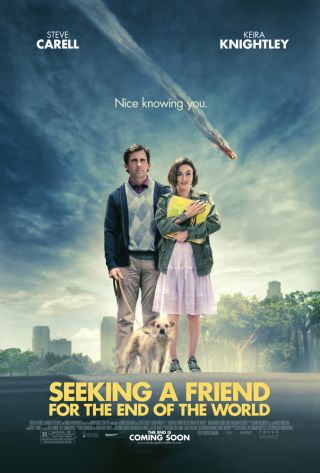 Like the poor Earthlings whose impending doom the genre chronicles, the asteroid disaster movie could be on its last legs.

That may not be immediately apparent, since a new killer-asteroid film, "Seeking a Friend for the End of the World," opens at theaters nationwide Friday (June 22). But scientists are making so much progress finding and tracking big, dangerous space rocks that a surprise civilization-threatening impact is becoming less and less realistic.

It's highly unlikely, for example, that a 6-mile-wide (10-kilometer) near-Earth asteroid — the size of the space rock thought to have wiped out the dinosaurs 65 million years ago — lurks out there undiscovered, researchers say.

"We know everything out there that is that big, and there is just nothing right now that's in an orbit that's any threat toward the Earth," said Lindley Johnson, program executive for the Near Earth Object Observation Program at NASA headquarters in Washington, D.C. [Photos: Scenes from 'Seeking a Friend for the End of the World']

Hunting down the most dangerous asteroids

Asteroids much smaller than the dino-killer could still inflict catastrophic damage if they slammed into Earth. In general, scientists think a strike by anything at least 0.6 miles (1 km) wide could have global consequences — most likely by altering the world's climate for years to come.

Observations by NASA's infrared WISE space telescope recently allowed astronomers to estimate that there are about 981 of these mountain-size asteroids on orbits that bring them relatively close to Earth.

That number may sound scarily large. But sky-scanning researchers have already found and catalogued nearly all of them, Johnson said.

"We're almost 95 percent complete on objects that are larger than 1 kilometer in size," he told SPACE.com. [Photos: Asteroids in Deep Space]

It's possible, of course, that one of the huge, as-yet-undetected near-Earth asteroids does pose a threat to our planet sometime down the road. But that threat could be mitigated, or even eliminated, if we spot it soon enough.

Researchers have several ideas about how to avert a devastating impact, given enough lead time.

One is the so-called gravity-tractor method, in which a small, unmanned probe is launched to rendezvous with the asteroid in deep space. The spacecraft would travel with the space rock, exerting a tiny but constant gravitational tug that would eventually nudge the asteroid into a benign orbit.

We could also be much more aggressive with our rendezvous craft, slamming it into the asteroid to knock it off course. We have the know-how to perform both of these missions; multiple spacecraft have met up with asteroids in deep space, and in 2005 NASA smashed an impactor into the comet Tempel 1 to determine the object's composition.

If the threat is more immediate, we could try to blow the asteroid up with a nuclear weapon. Many researchers are leery of this technique, however, saying that it would be tough to pull off politically. And the nuclear option may actually do more harm than good, sending a spray of asteroid chunks toward Earth instead of one intact rock.

So the key, scientists say, is to discover any potentially dangerous asteroid as early as possible so that all of our mitigation options remain on the table.

"If we do our jobs right, we'll know years in advance about a threat," Johnson said.

The progress being made on the really big space rocks is not grounds for complacency. There are many thousands of smaller near-Earth asteroids out there that could inflict devastating damage if they hit us, albeit on a local scale.

"A 150-meter object could be a pretty bad day for a state-size area," Johnson said.

The percentages get worse as asteroid diameters go down, since small space rocks are both more numerous and harder to detect than their larger kin. Still, Johnson voiced optimism that we could get a complete catalogue of the truly dangerous near-Earth asteroids within the next few decades — especially if we launch a spacecraft that could search the region of space interior to Earth's orbit, an area that's tough for instruments on or near the planet to scan.

So in 20 or 30 years, movies that have asteroids wreaking havoc on even a regional scale may be unrealistic. And maybe that's just as well; a film about the destruction of Kansas or Illinois probably wouldn't fill the theaters.

But this is probably selling Hollywood short. If moviemakers want to rain death down on humanity, they don't necessarily need near-Earth asteroids. They could sling a space rock from the main asteroid belt toward us, for example, or use a comet. (Many comets orbit the sun at vast distances, and scientists think there may be billions of the icy bodies out there that we've never seen.)

And, of course, there's always planet Nibiru, the supposed stealth world trumped up by doomsaying conspiracy theorists. NASA has repeatedly assured us, however, that Nibiru doesn't exist.