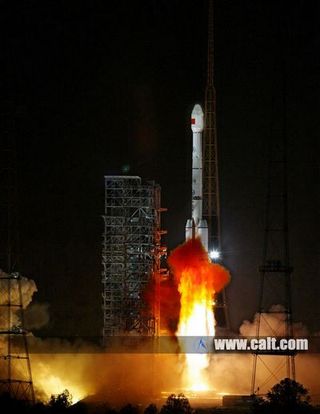 A Chinese Long March 3B rocket launches the new Chinasat 2A military communications satellite into orbit on May 26, 2012, from the Xichang space center.
(Image: © China Academy of Launch Technology)

A Long March 3B rocket lifted off Saturday and successfully deployed a Chinese military communications satellite bound for an orbit over the equator, state media reported.

The 185-foot-tall launch vehicle, weighing about one million pounds, blasted off at 1556 GMT (11:56 a.m. EDT) Saturday from the Xichang space center in southwest China's Sichuan province. Launch was at 11:56 p.m. Beijing time.

The Long March 3B/E rocket flew with an enhanced first stage and liquid-fueled boosters. The three-stage rocket released the Chinasat 2A payload in an oval-shaped transfer orbit ranging in altitude from 129 miles to about 22,240 miles.

The Chinasat 2A spacecraft will circularize its orbit about 22,300 miles over the equator, where its speed will match the rate of Earth's rotation, making the satellite appear to hover over a fixed position.

The Xinhua news agency reported the satellite was built by the China Academy of Space Technology. The craft is likely based on China's DFH-4 satellite platform, China's most powerful standardized platform for communications missions.

According to Xinhua, the Chinasat 2A satellite "will be used to meet the demands for China's radio and TV broadcasting and broadband multimedia transmissions."

But analysts believe the satellite will serve with Chinese military with on-the-move communications.

Saturday's liftoff was the eighth space launch of the year for China, and it marked the 28th launch to reach orbit worldwide in 2012.