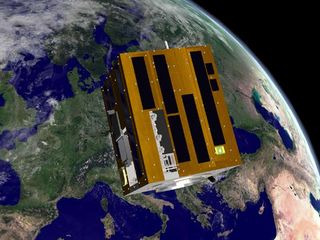 Amicrosatellite built largely from donated parts in university workshops acrossEurope is just over one week from launch. It is the first in a trio of student-built spacecraft that will ultimately reach for the Moon.

It tookonly 18 months for more than 400 students - spread across 23 universities and12 countries - to design and build the SSETI Express spacecraft. Set to launchfrom Russia's Plesetsk Cosmodrome on Sept. 30, the project is part an educationeffort by the European Space Agency (ESA) to boost student interest in spacetechnology and offer some hands-on experience.

"The ideais for the students to benefit from the real experience," Philippe Willekens,education projects administrator for the ESA, told SPACE.com. "I can sayeasily that this satellite was 99 percent made by them."

"It was agreat opportunity to learn a lot about high space technology," said Marcin Jagoda,who graduated from Poland's Wroclaw University of Technology in July where histeam developed the satellite's communications system, in an e-mail interview. "I'mreally looking forward to launch."

SSETIExpress, short for Student Space Exploration Techology Initiative Express, is aboxy satellite about the size of a small washing machine.

The 136-pound(62-kilogram) spacecraft is expected to snap photographs of Earth, test acold-gas attitude control system and function as a radio transponder for amateurradio operators.

Thespacecraft will also serve as a mothership for three picosatellites, tiny cubesjust under four inches (10 centimeters) wide, built by universities in Germany,Japan and Norway. The picosatellites will be ejected into space on orbit.

While therewas a small bit of "shadow engineering" during SSETI Express' development, itwas the students who handled the lion's share of the work, Willekens added.

"Thebiggest challenge is, from my point of view, the collaboration with the otherteams," said Nils Harmsen, a fourth-year student at the University of Stuttgartin Germany who worked on SSETI Express' propellant system, in an e-mailinterview. "You have to take care of all your team's interfaces with othersystems...if the interfaces aren't alright, it will cost the whole project a lotof time and nerves."

"We'lllearn from our lessons and we'll optimize," Willekens said. "I am convincedthis is one of the best ways to educate."

While SSETIExpress will launch atop a Russian Kosmos 3M rocket later this month, the 264-pound(120-kilogram) ESEO spacecraft - nearly twice as heavy as its predecessor -will fly aboard an Arianespace Ariane 5 rocket slated for a 2008 liftoff. Thelunar orbiter is scheduled to fly sometime between 2010 and 2012, and isexpected to conduct experiments during the flights to and from the Moon, ESAofficials said.

Studentscan also get involved in much more than just building a spacecraft, since thereare legal and public affairs functions that also must be fulfilled, Willekenssaid.

In additionto boosting student interest, the ESA is also hoping to attract the amateurradio community.

The space agencyis hosting a world-wide contest to radio amateurs, calling on them to tune intoSSETI Express' broadcast and retrieve any data they can gather. ESA officialsare offering free downloadable software and access to the satellite's UHF andS-band communications systems for interested participants.

The firstperson to retrieve, decode and submit a transmission from the SSETI Expresssatellite will win a keen "I heard it first" t-shirt, ESA officials said.

The amateurradio operator who submits the largest number of valid telemetry packets fromthe spacecraft to SSETI Express mission control by 12:00 a.m. Jan. 1, 2006 willsnag an invite to the Student Technology Education Conference 2006 in Germany.

Moreinformation on both contests is available at the Radio Amateur Connectionportion of the student-run SSETI Mission website here.

Meanwhile,SSETI teams continue to work on their next project, the ESEO satellite now twoyears from its planned spaceflight.

"SSETIExpress will be testing some of the hardware we will use in ESEO," explained aeronauticalengineering student Christina Trobajo, who is coordinating an ESEO team atImperial College, adding that the project pays off in spades. "We're all very excitedabout it, as it's our desire to see our work in space."