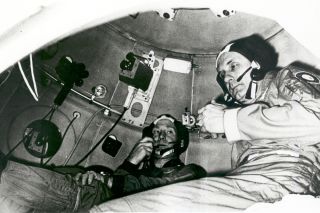 In this historical photo from the U.S. space agency, Cosmonaut Aleksey A. Leonov (left) and astronaut Thomas P. Stafford take part in Apollo-Soyuz Test Project (ASTP) joint crew training at the Cosmonaut Training Center (Star City) near Moscow. They are inside a Soviet Soyuz orbital module trainer on April 25, 1975.

The two men were the commanders of their respective ASTP prime crews. ASTP was a cooperative space mission between the United States and the USSR. The goals of ASTP were to test the ability of American and Soviet spacecraft to rendezvous and dock in space and to open the doors to possible international rescue missions and future collaboration on manned spaceflights.

The Soyuz and Apollo crafts launched from Baikonur and the Kennedy Space Center respectively, on July 15, 1975. The two spacecraft successfully completed the rendezvous and docking on July 17th. While the Soyuz craft returned to Earth on July 21st, the Apollo craft stayed in space another 3 days, landing on July 24th in the Pacific Ocean. ASTP was a success, as not only did crews accomplish the rendezvous and docking, but they also performed in-flight intervehicular crew transfers and various scientific experiments.

ASTP proved to be significant step toward improving international cooperation in space during the Cold War.