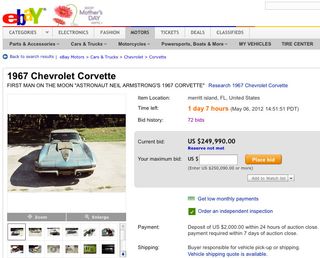 An eBay auction for a beat-up 1967 Chevrolet Corvette, purportedly first owned by astronaut Neil Armstrong, ended Sunday evening with a final sky-high hammer price of $250,090. But despite the astronomical bid, the seller may have not sold the first moonwalker’s car.

The highest bid for the sports car described as the "ultimate Corvette 'barn find,'" failed to meet the seller's hidden reserve, the price above which he was obligated to sell.

The seller could still choose to sell the car for the $250,090 offered, which appears to have been clearly focused on the claim that Neil Armstrong had driven the car rather than its make, model or condition. Although described as stored in a climate-controlled environment, the Corvette Sting Ray has not been driven since 1981.

"As can be seen in the pictures, the car has 30+ years of dust and has had fender flares crudely added by the owner during it's time in storage," the seller wrote on eBay. "The only thing that has been done to the car since I purchased it is to get the motor running where it can be moved about the garage."

To prove its pedigree, the seller presents the car's original General Motors "Protect-O-Plate," a factory issued metal tag that displays the name of the car's original owner. A carbon rubbing of the raised plate shown with the description reveals the name "N. A. Armstrong." [Lunar Legacy: Apollo Moon Mission Photos]

If indeed the N.A. Armstrong listed on the car's tag is the same as the Neil (Alden) Armstrong who commanded the Apollo 11 first lunar landing mission in July 1969, then he came to drive it through a special deal with a professional race car driver-turned-car dealer.

After General Motors gifted astronaut Alan Shepard with a white 1962 Corvette to congratulate him on becoming the first American in space, Indianapolis 500 winner and Florida Chevrolet-Cadillac dealer Jim Rathmann came up with the idea to offer Shepard's fellow fliers Corvettes of their own.

Rathmann negotiated a special lease arrangement to put the Mercury astronauts into the cars. For $1 per year, the spacemen could drive the latest model Corvette and then trade it in for a new one.

The lease program was popular with the astronauts and proved to be good exposure for Chevrolet, so it continued into the Gemini and Apollo programs.

Armstrong joined the astronaut corps in 1962 with NASA's second group of astronauts. According to his authorized biography, his first leased Corvette was damaged when a fire destroyed his house.

Several years and cars later, Armstrong traded in his 1967 blue Sting Ray for a new Vette.

"This Corvette was bought by a NASA employee when Mr. Armstrong turned it in and was retained by the owner until I purchased the Corvette from him in February of 2012," the eBay seller wrote in his auction's description.

The seller intended to restore the Corvette but due to "too many things going at this time" he decided to part with it instead.

"This Corvette is a true piece of history and belongs in a museum or private collection," the seller wrote.

It's not uncommon for items associated with Armstrong to command a premium on the collector's market.

Armstrong's autograph, for example, can sell today for as much as 10 times more than his fellow Apollo astronauts, even though he signed freely for more than three decades (Armstrong stopped signing autographs in 1994, citing the commercialization of his signature). [Photos: Apollo Moon Landing Sites]

But usually that premium relies heavily on provenance, or proof, that the item being sold did indeed originate with the first moonwalker.

Neither the seller nor searches through archival imagery sources show a photo of Armstrong with the 1967 Sting Ray offered in the auction. The closest footage seems to be an old German newsreel that includes film of Armstrong pulling up to work in a Corvette, but it was shot in 1965.

"If the paperwork is authentic as advertised then the buyer can take that as evidence of his ownership," one collector wrote on collectSPACE.com's forums, but added, "by the time you're done with the time and expense of restoring it, there won't be much left original to the Armstrong period."

"This car will need a complete restoration to bring it back to life. To me that will take away from [the] 'survivor' fact and that Neil Armstrong owned it."

"Depending on how much [of a] restoration is required, say whole new interior, then the only original parts that Mr. Armstrong is associated with are the metal in the seat frame, steering column and wheel, dash, etc." the same collector added to the forum later. "I guess if you kept the 'worn' out original seat covers, then you can say that Mr. Armstrong sat in these seats."

"I would be running the history on the car's VIN [Vehicle Identification Number] tracking down all the documentation that proves Neil Armstrong owned / operated / leased this car," he said. "As a vintage car collector myself, that is what I would be doing to verify the car's history."