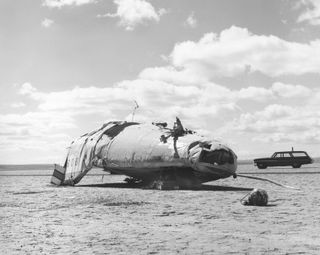 A crash landing by the M2-F2 on the Rogers dry lakebed.
(Image: © NASA)

In this historical photo from the U.S. space agency, an M2-F2 aircraft is seen after it crash landed on Rogers Dry Lakebed at the Dryden Flight Research Center at Edwards, California on May 10, 1967. NASA research pilot Bruce Petersen was severely injured  in the crash; he eventually recovered but lost vision in his right eye. The wingless M2-F2 flipped over six times after it hit the dry lakebed.

The M2-F2 were heavyweight lifting bodies. The "M" refers to "manned" and "F" refers to "flight" version.  Peterson’s fateful flight was the 16th and last glide flight of the M2-F2 before it was scheduled to have begun powered flight with its XLR-11 rocket engine.

As Peterson neared the lakebed, the M2-F2 entered a "Dutch roll" oscillation. Peterson regained control, but then was distracted by a rescue helicopter that seemed to pose a risk of collision, according to a NASA account of the event. Distracted, Peterson drifted in a crosswind to an unmarked area of the lakebed where it was very difficult to judge the height over the lakebed surface because of a lack of the guidance markers provided on the lakebed runway. Although Peterson fired the landing rockets to provide additional lift, the M2-F2 hit the lakebed before the landing gear was fully down.

NASA determined the M2-F2 had lateral control problems, and, during the rebuilding effort, it was modified with an additional third vertical fin, and the modified vehicle was renamed the "M2-F3." The M2-F3 hangs in the Smithsonian Air and Space Museum.

Video footage of the M2-F2 crash was later used in the opening sequence of the "The Six-million Dollar Man,” TV series in the 1970s.