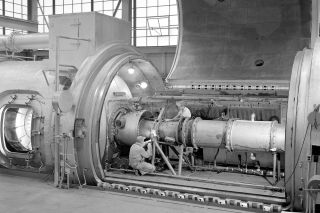 In this historical photo from the U.S. space agency, a Bomarc installation in Propulsion Systems Laboratory (PSL) is shown on Oct. 5, 1954. Bomarc was a long-range interceptor missile for the Air Force that underwent a long period of development in the 1950s. The Boeing and University of Michigan-designed missile was launched vertically using a rocket engine, but its flight was powered by two 28-inch-diameter Marquardt ramjets.

The ramjets for Bomarc were studied in PSL in 1954 and 1955. The studies covered a variety of performance issues including the systems dynamics response and the pneumatic shock-positioning control unit. The lengthy development was hampered by budget constraints and political in-fighting. Ten Bomarc sites were established when deployment was finally completed in 1962. The view in this photo is of an engine air calibrator installed in altitude tank. Note view through inlet section door showing screened bellmouth with the supersonic nozzle at zero degrees angle of attack. The Bomarc was a nuclear-tipped surface to air missile for shooting down aircraft.