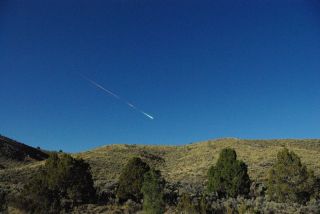 A meteor lights up the daytime sky above Reno, Nevada on April 22, 2012 in this amazing photo by skywatcher Lisa Warren. Scientists recovered fragments from the so-called Sutter's Mill meteorite in California after an intense search.
(Image: © Lisa Warren)

UPDATE: For the latest on the meteorites from the fireball over California, read: Meteorites From Big Fireball Spark Space Age 'Gold Rush'

Two small meteorites found in California are most likely from the minivan-size asteroid that exploded in a dazzling, and rare, daytime fireball over the Golden State and parts of Nevada on Sunday (April 22), according to press reports. Scientists estimate that the meteorites are more than 4 billion years old.

The space rocks were found by Robert Ward, a meteorite hunter and collector from Prescott, Ariz., reported the Associated Press. He stumbled on the first piece Tuesday (April 24) on a stretch of road between a park and a baseball field in Lotus, Calif.

"It was just, needless to say, a thrilling moment," Ward told the AP.

When he spotted the meteorite, Ward said he "instantly knew" it was one of the most primitive and rare types of space rocks: a carbonaceous chondrite (CM).

"It is one of the oldest things known to man and one of the rarest types of meteorites there is," Ward said. "It contains amino acids and organic compounds that are extremely important to science." [Fallen Stars: A Gallery of Famous Meteorites]

The ancient rock, which weighs about 10 grams, even bears scars from its cosmic journey, with one side showing "fusion crusts from atmospheric entry," reported the AP.

Ward also found another space rock, but he suspects they originated from the same small meteorite that likely fragmented when it hit the ground. Both rocks weigh about 10 grams, according to the AP.

The meteorites are thought to have come from a dazzling daytime fireball that lit up the sky over California and Nevada on Sunday. The fireball, and accompanying sonic boom, was seen (and heard) as a minivan-size asteroid ignited as it slammed into Earth's atmosphere and broke apart, according to NASA scientists.

When the blazing meteor broke apart, it released enough energy to rival a 5-kiloton explosion, said Bill Cooke, who leads NASA's Meteoroid Environments Office at the agency's Marshall Space Flight Center in Huntsville, Ala. Before it disintegrated, the space rock likely weighed about 154,300 pounds (roughly 70 metric tons), he added.

Carbonaceous chondrites are intriguing to scientists because they are typically "rich in carbon and organics," Cooke told SPACE.com in an email.

Eyewitness reports of the event came from as far north as Sacramento, Calif., and as far east as North Las Vegas, Nev. Collectors and other meteorite enthusiasts are now retracing the path of the fireball, trying to find any remnants of the space rock that may have fallen to the ground.

"The area NW of Placerville is being swarmed by meteorite hunters in a second "Gold Rush," Cooke said.

Other fragments from this meteor could have reached the ground along a swatch of ground as long as 10 miles (16 kilometers), most likely west from Coloma, Calif., said John Wasson, a professor at UCLA's Institute of Geophysics and Planetary Physics.

"I'm sure more will be found, I'm hoping, including some fairly big pieces," Wasson told the AP. "The fact that two pieces already have been found means one knows where to look."