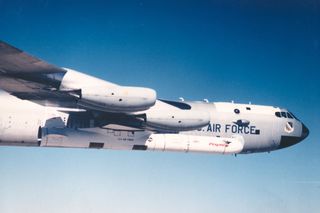 A Pegasus being carried to altitude by B-52.
(Image: © NASA)

In this historical photo from the U.S. space agency, a Pegasus rocket is carried to altitude beneath a B-52 on Apr. 5, 1990. The Pegasus was developed as a low-cost way to put small payloads into space. It's somewhat like an oversized model rocket. An air-launched, three stage, all solid-propellant, three-axis stabilized vehicle, the Pegasus can put a 1,000 pound payload into low-Earth orbit.

To get there, a Pegasus is released from a B-52 at about 39,000 feet, freefalls for around 5 seconds, then the first stage motor fires and accelerates the rocket to over 5,000 mph. The motor burns out after about 76 seconds, and a second stage ignites at the 97-second mark. Nearly 10 minutes later, the rocket can reach an altitude of 460 miles above earth, doing nearly 17,000 mph, and the payload is released.