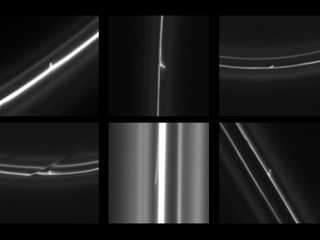 The discovery comes from detailed photos taken of the Saturn system by NASA's Cassini orbiter. In these images, researchers spotted strange objects about a half-mile (kilometer) wide tearing through Saturn's F ring, the thin outermost discrete ring around the planet.

As they pass through the ring, these interlopers drag glittering ice particles out with them, creating visible trails of debris scientists are calling "mini jets."

"I think the F ring is Saturn's weirdest ring, and these latest Cassini results go to show how the F ring is even more dynamic than we ever thought," Carl Murray, a Cassini imaging team member based at London's Queen Mary University, said in a statement. "These findings show us that the F ring region is like a bustling zoo of objects from a half mile in size to moons like Prometheus a hundred miles in size, creating a spectacular show."

The F ring is held in check by two tiny moons, Prometheus and Pandora, which weave inside and outside the outer ring. Sometimes these moons perturb the ring, creating channels and snowballs. Now scientists think that some of these snowballs survive to become the weird objects punching new holes in the ring. [Video: Saturn's F Ring Bashed by Weird Objects]

The objects appear to collide with the ring at mild speeds of about 4 mph (6.4 kph), but can leave relatively long trails extending between 20 to 110 miles long (40 to 180 kilometers).

"The F ring has a circumference of 550,000 miles [881,000 km], and these mini-jets are so tiny they took quite a bit of time and serendipity to find," said Nick Attree, a Cassini imaging associate at Queen Mary. "We combed through 20,000 images and were delighted to find 500 examples of these rogues during just the seven years Cassini has been at Saturn."

The F ring, which stands alone beyond the thick clump of Saturn's main rings, has long puzzled scientists. It was first discovered in the early 1980s by the Voyager probe.

"Voyager found a bright ring, shepherded into a tight orbital corridor by two of Saturn's moons, Prometheus and Pandora, the so-called 'shepherd moons,'" Carolyn Porco, Cassini Imaging team leader, wrote in an email to reporters. "But it was the complexity of this ring that baffled:  isolated bright clumps, individual strands, braided regions, kinky segments all seemed at the time to be inexplicable ... Tens of thousands of Cassini images later, we have come finally to understand the intricate workings of this most beguiling ring."

Cassini launched in 1997 as part of the Cassini-Huygens mission, a collaboration between NASA, the European Space Agency, and the Italian Space Agency. The orbiter has been circling the ringed planet since 2004, and is currently on an extended mission until at least 2017.

The researchers are presenting their findings today (April 24) at the European Geosciences Union meeting in Vienna, Austria.