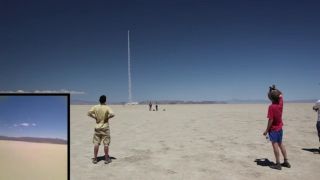 A rocket carrying the full PhoneSat payload launches during a preliminary test. The bottom left shows the view from the smartphone payload
(Image: © Ben Howard/PhoneSat)

NASA has invested in a wide array of big and small technologies that go beyond keeping the space station alive or building new rockets for deep-space missions. Case in point: the U.S. space agency wants to launch a Nexus One Android smartphone as a "CubeSat" satellite in September or October of this year.

That's just one of more than 1,000 technology projects begun in recent years that could pave the path forward for both space exploration and better living on Earth. Last year, NASA's new Space Technology Program began investing in technologies at all levels of maturity — projects ranging from the earliest stages of lab innovation to technology demonstration missions costing tens of millions of dollars.

Peck described the "PhoneSat" project at NASA's Ames Research Center in Moffett Field, Calif., as "an exciting project where we have a chance to leverage consumer technology." Similarly, smartphone-controlled SPHERES robots have already begun carrying out tech demonstrations and assisting astronauts aboard the International Space Station.

NASA has also thrown its weight behind more heavily funded efforts. A deep-space atomic clock project will "enable us to navigate further and more precisely than we ever have before," Peck explained. The chief technologist also pointed to a companion technology demonstration mission that would encode information inside lasers capable of transmitting data between Earth and space missions 100 times faster.

If all goes well, such space technologies may come back down to Earth — just as consumer electronics have enabled new space tech. Peck placed heavy emphasis on NASA enabling space technology spinoffs.

"The innovation that we foster, the hard problems we solve at the agency, have a direct impact on the American economy," Peck said. "When we point the men and women of NASA and its contractors at hard problems, we get these innovative solutions that have yielded hundreds of jobs."

The teleconference came at a time when NASA's space shuttle fleet has just begun flying to its retirement homes. But the space agency's officials seemed keen on looking beyond the space shuttle era to a brighter future for space science and technology, despite their acknowledgement of the usual budget limitations.

"I see the obvious challenges in that we're trying to do all we want to do within the fiscal constraints we live with," said Waleed Abdalati, NASA chief scientist. "But with prudent choices and execution, I think our future looks as bright — if not brighter — than our past."