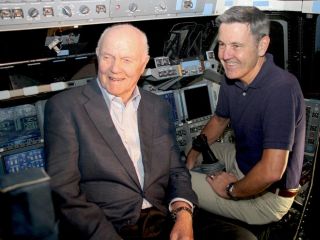 While NASA prepares to deliver the space shuttle Discovery to its final museum home, some high-profile guests have visited the vehicle over the past few months to bid their goodbyes: the men and women who helped build the iconic space plane, and the privileged few who flew on it.

The shuttle Discovery is scheduled to fly from the Kennedy Space Center in Florida to Washington, D.C. atop a modified Boeing 747 aircraft on April 17, weather permitting. It will be delivered to the Smithsonian National Air and Space Museum's Stephen F. Udvar-Hazy Center in Chantilly, Va., to be placed on public display for posterity.

But before the orbiter departs from its soon-to-be-former Florida home port, many special visitors have come to say farewell, said Stephanie Stilson, NASA's flow director for the transition and retirement of the space shuttles at the Kennedy Space Center.

"There are a number of people who have come back for one last opportunity to sit in the seat and experience it," Stilson told SPACE.com. "Our center director, Bob Cabana, flew on Discovery multiple times, and he has gone into Discovery many times before, but he had his moment to say goodbye. Mike Coats, who is the center director at the Johnson Space Center, came by, and others too."

In February, during celebrations to mark the 50th anniversary of John Glenn becoming the first American to orbit the Earth, Cabana and Glenn climbed aboard Discovery and posed for pictures on the shuttle's flight deck. [Photos: Inside Shuttle Discovery]

Glenn was a member of NASA's first astronaut class, and his Friendship 7 flight, on Feb. 20, 1962, was one of several important milestones that came out of the agency's so-called Project Mercury.

In 1998, at age 77, Glenn became the world's oldest astronaut after flying to space again on the shuttle Discovery's STS-95 mission.

Cabana is a veteran of four space shuttle missions, including two flights aboard Discovery. Cabana piloted Discovery on the STS-41 mission in 1990 and the STS-53 mission in 1992.

Other current and retired astronauts have visited Discovery since the orbiter was retired from service, Stilson said, as well as engineers who have helped build and maintain the vehicles over the course of NASA's 30-year program.

"It is nice to get to share that with them one more time and hear their experiences, and share their stories of what they were able to do with these great vehicles," Stilson said.