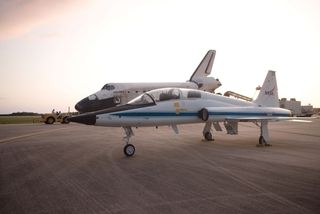 Two NASA T-38 jets, like the one seen here in the foreground, will scout the skies ahead of space shuttle Discovery (background) arriving in Washington, D.C.
(Image: © NASA/Story Musgrave)

The first 'A' in NASA's acronym name — Aeronautics — will play a leading role in the final flights of its recently retired shuttle program. Space agency jet aircraft will take to the air Thursday (April 5) to prepare for the first in a series of deliveries of space shuttles to museums.

NASA is set to deploy two of its four orbiters later this month, and will first fly space shuttle Discovery to Washington, D.C. for its display by the Smithsonian's National Air and Space Museum. If weather allows, a modified Boeing 747 will convey the 30-year shuttle program's fleet leader from the Kennedy Space Center in Florida to Washington Dulles International Airport on the morning of Tuesday, April 17.

On the way, NASA's shuttle carrier aircraft with Discovery flying piggyback will pass over the nation's capitol, setting up the possibility of flyovers of the city's historic monuments and federal buildings. The exact route will rely on the weather, and for security reasons may not be released until the day of the flight.

To be ready for what may be a rare shuttle photo opportunity though, NASA will dispatch two T-38 training jets into the skies over Washington on Thursday to scope out the view.

"They're going to be flying to various locations and taking photographic imagery to scout out possible routes and the areas that they might want to fly over if weather will permit on the day of Discovery's arrival," said NASA spokesman Mike Curie. "These flights will help determine how viable it might be to do a flyover of Washington with the shuttle carrier aircraft." [Photo Tribute: NASA's Shuttle Program in Pictures]

NASA is working with the Federal Aviation Administration to navigate the restricted airspace over the Washington metropolitan area. The two T-38 training jets will fly approximately 1,500 feet (457 meters) above Washington between 9:30 a.m. and 11 a.m. EDT (1330 and 1500 GMT).

NASA put out the advance word of the activity so as not to concern those who may spot the jets flying overhead.

The white and blue T-38s, which are sometimes referred to as "white rockets" for their narrow fuselage, were used by shuttle astronauts to gain experience and proficiency working in dynamic environments. The jets were also used as chase planes for the space shuttles when they returned from orbit.

The T-38 pilots for Thursday's scouting flight will be NASA trainers rather than astronauts.

One or more of the T-38s may rendezvous with the shuttle carrier aircraft (SCA) when it arrives on April 17 to deliver Discovery.

Discovery's final ferry flight will mark the 38th time it has taken to the air atop NASA 905, the original of two shuttle carrier aircraft. NASA retired its second modified Boeing 747 earlier this year.

NASA 905 is scheduled to fly into Kennedy Space Center from Dryden Flight Research Center in Calif. on April 10. Four days later, Discovery will be lowered onto the SCA's back using the Mate-Demate Device, a large, gantry-like steel structure designed to load and unload orbiters for their ferry flights.

At Dulles, large cranes will fill the same role in reverse, lowering Discovery to the ground so it can be towed to the National Air and Space Museum's Steven F. Udvar-Hazy Center located adjacent to the airport.

An arrival ceremony, including a parade of space shuttle Discovery's former astronaut crew members, is planned for April 19. The event will launch the Smithsonian's four day public festival celebrating the orbiter's addition to the National Collection.

The shuttle carrier aircraft will meanwhile be paired with another orbiter, the prototype Enterprise, which will depart for New York's John F. Kennedy International Airport on Monday, April 23, weather permitting. Later this summer, Enterprise will be barged around Manhattan to the Intrepid Sea, Air & Space Museum.

NASA 905, which in preparation for its museum deliveries was amended with painted mission markings showing the tally of all of its ferry flights, will fly its last space shuttle, Endeavour, to Los Angeles in September. The orbiter will then be rolled over land to the California Science Center the following month.