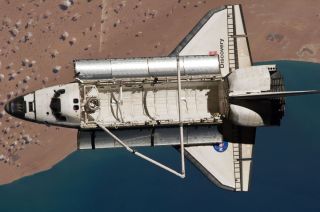 A retired NASA space shuttle and an early prototype for the winged spacecraft will make their final big journeys this month, traveling to the cities that house their museum retirement homes.

The shuttle Discovery — NASA's most-flown space plane — is slated to leave NASA's Kennedy Space Center in Florida on April 17, flying atop a specially modified Boeing 747 to Washington, D.C., where it will take up residence at the Smithsonian Institution's National Air and Space Museum.

For years, the Smithsonian has housed the prototype shuttle Enterprise, which performed a series of glide and landing tests in Earth's atmosphere but never reached space. To make way for Discovery, Enterprise will head up to New York City on April 23, where it is destined for display at the Intrepid Sea, Air and Space Museum several months later.

NASA retired its space shuttle fleet last July after 30 years of orbital service. Discovery is the longest-serving of the three remaining space-flown vehicles, and the most well-traveled; it first lifted off in 1984 and made 39 spaceflights, putting more than 148 million miles (238 million kilometers) on its odometer in the process. [Photo Tour Inside Shuttle Discovery]

Smithsonian officials are thrilled to have the veteran orbiter, which deployed NASA's Hubble Space Telescope in 1990, and they're planning a series of events to welcome Discovery. The orbiter is due to arrive at the museum's Steven F. Udvar-Hazy Center outside Washington on April 19, after being towed from Dulles International Airport.

"When NASA transfers Discovery to the National Air and Space Museum, the American people will gain a major icon of space history and an educational treasure to be valued now and for years to come," Smithsonian director Gen. Jack Dailey said in a statement. "We invite the public to help us welcome Discovery to the collection of the Smithsonian Institution."

Discovery last flew to space in February 2011, on a two-week mission to the International Space Station. After landing, it underwent a lengthy decommissioning process at Kennedy Space Center to make it safe for public display.

Unlike Discovery, the Enterprise shuttle prototype requires no such processing, since it has been at the Smithsonian since 1985. Enterprise was the first orbiter NASA ever built, though it had no engines and lacked a functional heat shield.

NASA's other two space-flown shuttles, Atlantis and Endeavour, are currently being prepped for their museum retirements as well. Endeavour is slated to arrive at the California Science Center in Los Angeles this September, while Atlantis will make the short trip to the Kennedy Space Center Visitor Complex in early 2013.

Over the history of the shuttle program, five vehicles reached space. Two of them were destroyed in tragic accidents that killed their seven-astronaut crews. Challenger exploded shortly after liftoff in 1986, and the shuttle Columbia broke apart during re-entry to Earth's atmosphere in 2003.