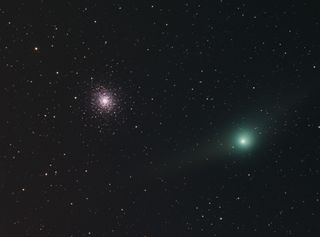 Comet Garradd passed within half a degree of M92 as it sailed through the Hercules constellation in this image by astrophotographer Bill Snyder on Feb. 3, 2012.
(Image: © Bill Snyder)

Comet Garradd sails slowly past globular star cluster M92 in this stunning image from a skywatcher in California.

The comet approached M92 as it flew over the Hercules constellation. It passed within half a degree of M92 on the day the image was taken.

M92 is one of the brightest globular clusters in the sky, and can sometimes be seen with the naked eye from the northern hemisphere. It's located more than 27,000 light-years from Earth. (A light-year is the distance light travels in one year — about 6 trillion miles, or 10 trillion kilometers.)

Comet Garradd is a slow-moving comet and has a magnitude of 6.5. Magnitude is used in astronomy to measure the brightness of an object. On this scale, smaller numbers represent brighter objects. The dimmest objects visible to the human eye are about magnitude 6.5, the same as Garradd.

If you look closely at the image, this comet appears to have two tails. The icy object begins to warm as it nears the sun and gas is created, forming the "halo" (called a coma) seen in the image. As the gas and rock particles in the coma move away, the gas is blown in one direction by solar wind while the rock particles ted to lag behind, creating the illusion of two tails.