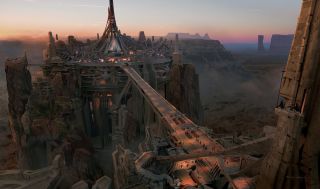 The city of Helium, also referred to as "The Jewel of Barsoom (Mars)," is the home of Princess Dejah Thoris in the forthcoming film, "John Carter."
(Image: © ©Disney Enterprises, Inc.)

When the novel "A Princess of Mars" was published in 1917, space exploration was just a theory.

But according to Andrew Stanton, director of "John Carter," the book's new film adaptation, it was that curiosity about what might be beyond Earth that helped fuel its writer, Edgar Rice Burroughs, and other science fiction novelists of the time.

"They were the few that were starting to go, 'What's under the world? What's outside the world, what's beyond the borders of just simply traveling father in a boat or in a cart?'" Stanton told SPACE.com. "The whole earth was finally getting mapped, and the sense of exploring, which had been around forever, had to go farther, had to go into space, almost out of necessity."

In "John Carter," the title character (played by "Friday Night Lights" alum Taylor Kitsch) is transported from post-Civil War America to Mars — or as the natives call it, "Barsoom" — and is soon embroiled in a planetary war. Some Martians look and talk just like humans, while others are considerably more alien.

Stanton's previous film, 2008's Pixar animated feature "Wall-E," also involved space travel of a very different kind — shiny and futuristic rather than arcane and magical. Still, Stanton acknowledges that he has a tendency towards space-set fiction, even if he isn't necessarily conscious of it. [Gallery: Visions of Mars from 'John Carter']

"I must," Stanton said, with a laugh. "I think it's a little overblown because these two are juxtaposed against each other, and that was just more of a timing of when things were possible. But when I look back at the literature I read and the movies I loved, it does skew a little bit more into the sci-fi side."

Though "John Carter" has its origin in century-old literature — the first Barsoom story was published in 1912 — Stanton didn't attempt to modernize the story, and in fact, he embraced Burroughs' original text for its timelessness.

Though the "John Carter" stories have influenced a variety of science fiction from "Star Wars" to "Avatar" and been adapted in multiple comic book series (Stanton's original introduction to the work), this is the first theatrically released feature film based on the material. After attempts dating back to the 1930s, Stanton, a Pixar veteran, came to the film after Disney acquired the rights in 2007.

In shaping the film's story, Stanton, who also served as screenwriter along with Pixar's Mark Andrews and Pulitzer Prize-winning author Michael Chabon, went straight to the source.

"It reads like a traveler that's gone somewhere and journaled what this new culture and all the rules of its history are, and with as many details as they could muster," Stanton said. "That's what's so intoxicating about it."

Despite positive reviews from outlets including The Hollywood Reporter, the prerelease press has often been rough on "John Carter," with word of a more than $250 million budget and entertainment industry blog Deadline reporting that a studio executive dubbed it "the biggest writeoff of all time."

That type of talk hasn't seemed to affect Stanton, who is staying upbeat.

"I've been doing this since 1992. And I learned in 1995 that all you can control is whether the movie's any good when you're actually in the theater, but you can't control anything else," Stanton said.

That same Deadline article said "women of all ages have flat-out rejected" the film, another claim that Stanton doesn't appear to be especially concerned about.

"I've always felt like it's a black hole to start worrying about what demographics will like it, and what might not," Stanton said. "A good story is a good story. If you're lucky, it attracts the right people."

Stanton, who also directed 2003's "Finding Nemo," is making his live-action debut with "John Carter." Brad Bird, who directed Pixar's "The Incredibles" and "Ratatouille," made a similar move this past winter with "Mission Impossible: Ghost Protocol," a film that has grossed more than $679 million worldwide.

No matter how "John Carter" fares, Stanton — who stressed that he's "never" leaving Pixar — said he's keeping his options open, and looks to be receptive to working in both animation and live-action in the future.

"I would say the sky's the limit. I've always just been idea-driven. It will always just be the story," Stanton said. "But I do love that I can realize any story that I've wanted to see on the screen now."

Albert Ching is a staff writer for Newsarama.com, a sister site of SPACE.com.