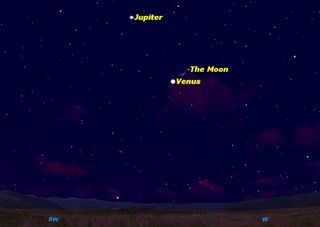 Anyone out under the stars in the early evening lately likely cannot help but notice two brilliant objects dominating the western sky: the planets Venus and Jupiter.

Venus, because it is closer to the sun than Earth, never strays far from the sun in our sky. Jupiter, being outside the Earth's orbit, can appear anywhere along the ecliptic — the path of the sun, moon, and planets across the sky. Venus and Jupiter are gradually growing closer, and will pass each other on March 13.

The moon, meanwhile, is making its monthly trip around the Earth and will pass these two planets on Saturday and Sunday this week (Feb. 25 and 26). The moon appears close to Venus on Saturday night, and then near Jupiter on Sunday night. The view on either night will be what astronomers call a triple conjunction.

The sky map of Venus, Jupiter and the moon for this story shows how they will appear during the celestial triple play.

In addition, for anyone observing both nights, it will be a spectacular demonstration of just how far the moon moves in a single night. We don't often have two such brilliant mileposts along the moon's path.

When observing this triple conjunction, be sure to pay close attention to the narrow crescent moon. If you look just above and to the left of the crescent, you will see the rest of the moon illuminated by the ghostly light of the planet Earth. With binoculars or a small telescope you can even see the seas and craters on the so-called "dark side" of the moon, lit by earthlight.

Some people are surprised by the angle of the moon's crescent at this time of year. Because of the angle the ecliptic makes with the horizon, the moon appears to be lit "from below" instead of from the side, like you see in textbooks.

If you are ever puzzled by the way the moon is lit, try to visualize where the sun is located below the horizon, and the moon's orientation should become clear. In our graphic, the sun is somewhat below and to the left of the "W" marker on the horizon, illuminating the moon from below and behind.

If you snap an amazing photo of Jupiter, Venus the moon or any other skywatching target and would like to share it for a possible story or image gallery, please contact SPACE.com managing editor Tariq Malik at tmalik@space.com.