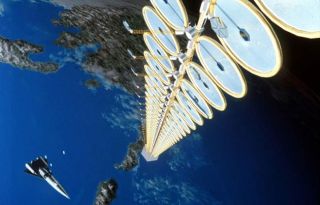 The U.S. Air Force has laid out a new vision for its energy science and technology needs over the next 15 years – a forecast that includes plans for space-based power stations  and the prospective use of small nuclear reactors for new spacecraft.

The report was released Feb. 9 and details how the Air Force plans to increase energy supply, reduce demand and change military culture to meet mission requirements.

"Energy is a center of gravity in war and an assured energy advantage can enable victory," said Mark Maybury, chief scientist for the United States Air Force. He spearheaded the report.

"While energy is already an essential enabler," Maybury said. "Global competition, environmental objectives and economic imperatives will only increase its importance."

Space is the "ultimate high ground," providing access to every part of the globe, including denied areas, the report explains. "Space also has the unique characteristic that once space assets reach space, they require comparatively small amounts of energy to perform their mission, much of which is renewable," it states. [Top 10 Space Weapons]

In the sweeping report a number of desirable high-tech advances are mentioned.

For example, the Air Force is currently limited to 27 kilowatt (kW) arrays for satellite power. But more power is required for some future space missions, the report states, such as flights currently being eyed by the Air Force, national security organizations and NASA. "Employing larger and more efficient arrays will enable missions that require very high power, such as space-based radar or space-based laser missions," the report states.

In the long term, the report says, increased solar cell efficiencies and revolutionary materials foreshadow the potential of 500 kW on-orbit power generation technologies, "which would be transformational for performing missions from space-based systems."

Furthermore, there are other breakthrough space energy technologies that have the potential of achieving up to 70 percent efficiency, the report adds. Examples include quantum dots and dilute nitrides in solar cells. But there are also totally new technologies such as space tethers that could harvest energy from the Earth's geomagnetic field. [Top 10 Alternative Energy Technologies]

In terms of nuclear power in space, several satellite systems have been energized by Radioisotope Thermoelectric Generators (RTG). This source provides consistent power, and at a much higher energy and power density than current technologies.

Work on small modular nuclear reactors on Earth is highlighted in the Air Force report: "While the implementation of such a technology should be weighed heavily against potential catastrophic outcomes, many investments into small modular reactors can be leveraged for space-based systems. As these nuclear power plants decrease in size, their utility on board space-based assets increases."

The Air Force report also delves into the wireless transfer of power, a technology that continues to offer big promises despite the daunting challenges involved in making it a reality.

An energy-beaming benefit for the military is powering sets of fractionated, distributed satellite systems, the report explains. Doing so would enable spacecraft to be smaller, more survivable, and more capable than current systems.

Like all computing architectures, these systems are currently composed exclusively of silicon- based technology. However, decades of work has begun to change this paradigm, the report points out. Newer systems require less energy and offer a reduced thermal load in comparison to their silicon counterparts, the report adds.

Advances in satellite propulsion are also spotlighted in the newly issued report. Today, the ability of space-based systems to alter their orbits is based on blasts of on-board fuel. The possibility of on-orbit refueling for these systems is now being studied.

In the mid- and far-term, the report suggests, other propulsion technologies will provide exceptionally efficient propulsion. That will allow the fuel onboard orbiting systems to be utilized for longer periods of time. Hall and electric thrusters, for instance, promise extended utility of limited onboard propellants.

Whatever the technology, new methods of generating power in space hold great promise for the Air Force's plans for new satellites and other space missions.

The report's cover letter, signed by both Secretary of the Air Force Michael Donley and Air Force Chief of Staff Gen. Norton Schwartz, explains how effective energy management not only plays a key role in supporting national objectives, but is also essential to operational readiness.

"Energy is essential to all Air Force missions," the letter states. "Improving energy efficiency, reducing demand and changing the culture is vital to mission success."