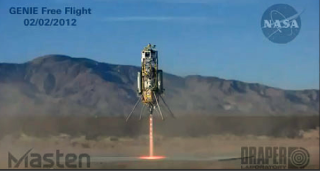 A private suborbital rocket passed a landing test for NASA with flying colors this month in a succesful trial run of technology that could help future spacecraft touch down on other planets or moons.

On Feb. 2, Masten Space Systems' Xombie rocket rose 164 feet (50 meters) off a launch pad in the California desert, moved sideways the same distance, and then landed softly on another pad. The entire flight lasted just 67 seconds.

The brief test flight demonstrated a new control system called the Guidance Embedded Navigator Integration Environment (GENIE), which was developed by the nonprofit Draper Laboratory in Cambridge, Mass. NASA's Flight Opportunities Program sponsored the recent flight, in the hopes that GENIE will enable more ambitious landing demonstrations in the future.

"The Draper and Masten team has done a tremendous job pulling together this flight demonstration in a short amount of time," said John Kelly, Flight Opportunities Program manager at NASA's Dryden Flight Research Center in Edwards, Calif. "Draper was awarded this task in September 2011. This capability will allow the program to quickly demonstrate landing technologies for future space missions."

After being tapped by the Flight Opportunities Program for the landing task, Draper chose Masten to provide the flight vehicle. Xombie has a record of success; in October 2009, the vehicle won the $150,000 second prize in NASA's Lunar Lander Challenge, which sought to spur the development of private spaceships and their flight software.