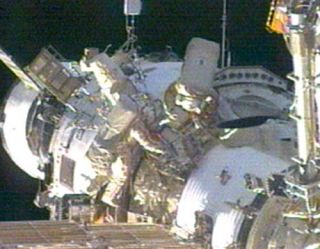 Twoastronauts are safely back inside the International Space Station (ISS) aftertoiling outside to retrieve a series of experiments and outfit the orbitallaboratory for a new cargo ship expected next year.

Thespacewalk ended early for ISS Expedition 11 commander Sergei Krikalev andflight engineer John Phillips, who were ordered back inside the station byRussian flight controllers after completing all but one of their appointedtasks.

Russian flightcontrollers decided to forgo the relocation of a grappling fixture for thestation's Strela boom - a two-hour job - after citing that the astronauts didnot have enough consumables or time to complete the procedure. Krikalev andPhillips had fallen about 45 minutes behind schedule during the spacewalk.

Krikalevand Phillips are in the fourth month of their six-month mission aboard the ISS.They began their spacewalk at 3:02 p.m. EDT (1902 GMT).

Thursday's spacewalkmarked the eighth EVA for Krikalev, a veteran space flyer who now holds therecord of the most cumulative days in space - he's spent 750 days in orbit andcounting. The spacewalk was a career first for Phillips.

"Youcan't get this view from the station, however much you look," Krikalevsaid while he and Phillips worked outside the ISS.

The twoastronauts retrieved several material exposure experiments from the exterior ofthe station's Zvezda service module, including Matryoshka- a nearly life-size torso filled with radiation sensors and the equivalent ofhuman tissue. The experiment, named after the Russian nesting dolls, isdesigned to measure the effects of the space radiation environment on the humanbody for future exploration missions to the moon and Mars.

"We are nowagainst the window and can see there's no one home," Krikalev said as he andPhillips pulled Matryoshka and other experiment back inside the Pirscompartment.

The camerawill assist in docking operations for the Automated Transfer Vehicle (ATV), anunmanned cargo ship developed by the European Space Agency to haul food,supplies and other equipment to the ISS. The first ATV, dubbed Jules Verne,will launch toward the station in 2006, NASA officials said.

Thursday's spacewalkwas the 62nd EVA aimed at maintaining and assembling the spacestation. It marked the 34th spacewalk staged from the ISS itself andthe 16th EVA to begin at the Pirs docking compartment.

Krikalevand Phillips arrived at the ISS aboard a Russian Soyuz spacecraft in mid-April,and are scheduled to ride that spacecraft back to Earth with space tourist GregOlsen - who will accompany the Expedition 12crew to the station - in early October.