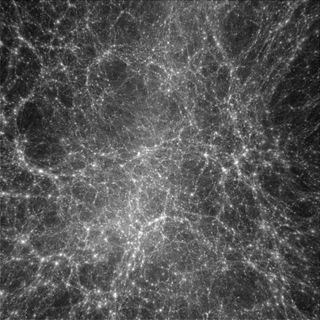 A computer simulation shows dark matter is distributed in a clumpy but organized manner. In the figure, high density regions appear bright whereas dark regions are nearly, but not completely, empty.
(Image: © Institute for the Physics and Mathematics of the Universe)

A group of Japanese physicists has revealed where dark matter is — though not what it is — for the first time. As it turns out, the mysterious substance is almost everywhere, drooping throughout intergalactic space to form an all-encompassing web of matter.

Dark matter is invisible: It doesn't interact with light, so astronomers cannot actually see it. So far, it has only been observed indirectly by way of the gravitational force it exerts on ordinary, visible matter. On the basis of this gravitational interaction, physicists have inferred that dark matter constitutes 22 percent of the matter-energy content of the universe, while ordinary detectable matter constitutes just 4.5 percent.

Shogo Masaki at Nagoya University and colleagues at the University of Tokyo’s Institute for the Physics and Mathematics of the Universe used computer simulations to model recent observational data of 24 million galaxies. By determining how light from the galaxies was bending slightly as it passed through space en route to Earth — an effect known as gravitational lensing — the researchers were able to work out the location of the dark matter that was bending it.

As detailed in a study published online Feb. 10 in The Astrophysical Journal, their model shows that dark matter extends from each galaxy far into intergalactic space, overlapping with the dark matter from adjacent galaxies to form a pervasive web that envelops the whole universe.

In fact, "intergalactic space" is a misnomer; the research shows that galaxies aren't contained regions with well-defined edges that are separated from one another by millions of light-years. Instead, they are composed of a central clump of ordinary, visible matter surrounded by a web of dark matter that extends "in an organized way halfway to the neighboring galaxy, so that the universe is filled with the material associated with … galaxies," the researchers wrote in a statement. [Gallery: The History and Structure of the Universe]

Furthermore, what we call "galaxies" are merely the peaks of this continuous matter distribution, the researchers explained.

The group mapped the distribution of dark matter over a distance of 100 million light-years from the center of each galaxy. "Its distribution," they noted, "is never random or uniform, but is well-organized."

Numerous dark matter searches are being conducted around the world. Scientists suspect the elusive material consists of WIMPs ("weakly interacting massive particles"), particles that are many times heavier than protons and only interact through gravity and the weak nuclear force.