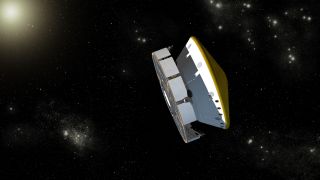 An artist's concept showing NASA's Curiosity Mars rover streaking through space. Curiosity launched on Nov. 26, 2011 and is slated to land on the Red Planet in August 2012.
(Image: © NASA/JPL-Caltech)

Engineers have fixed the glitch that caused a computer reset on the spacecraft carrying NASA's Curiosity rover shortly after it launched toward Mars in November, officials announced Thursday (Feb. 9).

The reset occurred on Nov. 29 — three days after the Curiosity rover blasted off — while the spacecraft was using its star scanner, a navigational tool. NASA engineers determined that the glitch was caused by a previously unknown idiosyncrasy in the memory management unit of the spacecraft's computer processor.

Researchers reconfigured a test computer on Earth, and the reset didn't recur after billions of runs. The mission team then made the software change on the spacecraft's computer last week and confirmed this week that the update was successful, NASA officials said.

"Good detective work on understanding why the reset occurred has yielded a way to prevent it from occurring again," mission deputy project manager Richard Cook, of NASA's Jet Propulsion Laboratory in  Pasadena, Calif., said in a statement. "The successful resolution of this problem was the outcome of productive teamwork by engineers at the computer manufacturer and JPL."

The Mars-bound spacecraft began normal use of its star tracker this week after the software update, and the instrument detected the Red Planet.

"Our target is in view," said JPL's Steve Collins, attitude control subsystem engineer for the spacecraft's cruise from Earth to Mars.

Curiosity, the centerpiece of NASA's $2.5 billion Mars Science Laboratory mission, is due to land at Mars' Gale Crater in early August of this year.

The 1-ton rover's chief aim is to gauge whether the Gale Crater area can, or ever could, support microbial life. Most of Curiosity's 10 different science instruments are built to help the rover answer this question.