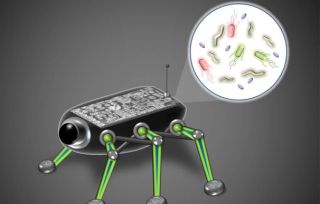 1) An illustration of how tiny space robots could power themselves with Earth microbes
(Image: © NASA/Naval Research Laboratory)

Today's robotic space missions take careful steps to avoid carrying tiny bacterial life from Earth that could contaminate the surface of Mars or other planets. That may all change if a NASA-funded effort can harness microbes as an almost endless power source for the next generation of robotic explorers.

Such microbial fuel cells could power space robots almost indefinitely, as long as their bacteria have the tiny amounts of food needed to stay alive and create electricity through their chemical reactions. That would offer an alternative to space missions that rely upon either nuclear or solar power for their batteries — NASA's Spirit Mars rover was officially declared dead last May after the Red Planet's harsh winter deprived it of sunlight for its solar panels.

"Whether you're looking at satellites or planetary explorers, to have a power system that's not reliant on the sun of the solar system, day or night cycles, and hazardous materials such as nuclear or other harsh chemicals, means you really open a lot of doors for expanding the duration of scientific missions," said Gregory Scott, a space robotics engineer at the U.S. Naval Research Laboratory.

The microbial fuel cells won't power huge robots such as NASA's car-size Curiosity rover in the near future, even if the experimental technology might eventually scale up to do so. Instead, they would trickle small amounts of electricity that can slowly charge a battery until enough energy exists to power a scientific instrument or move a tiny robot.

That process could ideally keep almost any small space mission going for as long as necessary.

"Given the fact that they are living organisms, they have a really long shelf life," Scott told InnovationNewsDaily. "The bacterial colony will live as long as you give it food — in our case, sugar — or one of the other biomass fuels we're looking into. The colony will be able to survive pretty much indefinitely."

Scott and his colleagues hope to make a prototype robot powered by microbes and weighing just over 2 pounds (1 kg) within the next 10 years. Their first year of funding comes from the NASA Innovative Advanced Concepts program.

But shrinking microbial fuel cells — some prototypes weighing 35 pounds (16 kg) on the small side — down to something that fits on a 2-pound robot will take years of work. The researchers must also figure out how to boost the small energy outputs of such microbial fuel cells even as they shrink the overall size and weight.

Another challenge comes from making even lower-power electronics for the next generation of tiny space robots or rovers. Such electronics must use very little or even no power in some periods to survive on the electricity supplied by microbial fuel cells.

The researchers also want to figure out a simple, reliable way for their tiny robot or rover to move about. One of their leading ideas involves a spring-loaded hopping system.

Once a working prototype robot has been built, researchers would begin to consider the challenges of sending microbes on missions headed for deep space, asteroids or distant planets — including the question of protecting extraterrestrial surfaces from contamination. Their current microbes consist of Geobacter sulfurreducens, a bacterium that does not require oxygen.

"There are planetary protection concerns, as well as concerns about protecting the microbes themselves from radiation," Scott said. "Sometime down the road we also have to consider whether the microbes we're looking at are most effective for radiation environments or extreme temperatures."