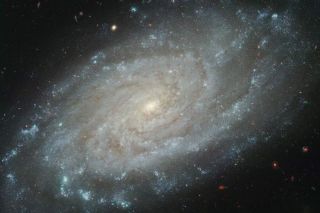 Is this what our own Milky Way Galaxy looks like from far away? Similar in size and design to our home galaxy, spiral galaxy NGC 3370 is about 100 million light-years away, toward the constellation Leo.
(Image: © NASA, ESA, Hubble Heritage (STScI/AURA))

This year, three astronomers were awarded the Nobel Prize in physics for discovering a bizarre aspect of our universe that gave rise to the concept of dark energy.

In 1998, two teams independently discovered that the expansion of the universe was not slowing down or holding steady, as expected, but speeding up. One team was led by Brian Schmidt of the Australian National University in Canberra, Australia and Adam Riess of the Space Telescope Science Institute in Baltimore, Md., and the other was led by Saul Perlmutter of Lawrence Berkeley National Laboratory in Berkeley, Calif.

SPACE.com spoke to Schmidt after his Nobel win to find out more about the weirdness of our universe, and what it feels like to win the world's most famous science award.

How did you find out you'd won the Nobel Prize?

Well you get a call, in my case, 15 minutes before the announcement. So at 8:30 on Tuesday night here in Australia, I received a call from a woman with an impeccable Swedish accent.

I have graduate students who like to play jokes on me, so I was thinking, wow, they did a pretty good job on this one. But they told me it was a very important phone call and they wanted to make sure it really was Brian Schmidt they were talking to, and then members of the committee come on and read their announcement, and congratulate you.

In my case, I'm a wine-maker, and they asked me about my 2011 vintage of wine, and then they asked me whether or not I'd be willing to go live at their announcement in seven or eight minutes to tell the world what I'd done.

How did you feel?

Well, I kind of went weak in the knees. And I got a little queasy, 'cause it's just so intense, it's so amazing. You're excited, but you're kind of scared at the same time.

How do you think the Nobel Prize will change your work? Will it bring more opportunities?

It certainly does that.

From my perspective, if you're in a country like Australia or the United States, it brings a huge responsibility to ensure that people understand why science is important to society. And Nobel Prizes are just such an amazing opportunity to highlight everything that science brings to our civilization, and how it's taken us to a level of prosperity that I think we all take for granted.

When you began this project back in 90s, did you ever think it might lead to a Nobel prize?

No. We wanted to do a big project, we wanted to measure the ultimate fate of the universe. [Images: Peering Back to the Big Bang]

Although that as a big project, it wasn't one that was going to win a Nobel Prize, no matter what we measured. But it was an important thing to measure, at least from an astronomy point of view, the future of the universe. Was it going to expand forever, or was it going to eventually halt in its expansion?

So, a fundamental question about the universe, but I have to admit the idea of winning a Nobel Prize about it just wasn't on the radar.

When you saw the first indications that the expansion of the universe was accelerating, how long did it take for you to believe your results?

Adam Riess sent me a preliminary preview at the end of 1997, and when I saw it I just assumed we made a mistake and it would go away.

So you know, after six weeks of plotting around, it was pretty clear that the result was not going to go away, and it just sort of slowly sunk in over a period of a couple of months. At some point it kind of sinks in and you're like, 'Oh, geeze. What are we going to do now? No one's going to believe this!' [Twisted Physics: 7 Mind-Blowing Findings]

Was it gratifying that the other team led by Saul Perlmutter found the same thing?

And so it's one thing to have a crazy result, and it's another thing to completely disagree with the other team doing a very similar experiment. So yeah, it was a little reassuring to see that we were getting the same thing once we found out about each other's results.

Do you think dark energy is the explanation behind this acceleration?

It's definitely hard. We are guessing that the universe is filled with energy, that's our best guess.

We're getting the Nobel Prize, not for dark energy — we're getting it for seeing the accelerated expansion of the universe. And so while I don’t think we're absolutely sure it's dark energy, I think that's the best explanation. But it could well be something even more exotic.

How do you think the universe will end?

The fate of the universe looks pretty bleak.

The universe is going to expand faster and faster over time and the reality that we see now will eventually fade away from view. It will be so far away that we won't be able to see its light anymore.

And so, while our own galaxy and a couple of other nearby galaxies will sort of merge together to form some super-galaxy, all the stars will eventually die because they run out of nuclear fuel, so we'll have a bunch of burned out embers surrounded by a sea of nothingness.

Do you find that depressing?

What inspired you to become an astronomer?

I became interested in astronomy when Comet West came by in 1975. That comet made me realize that the sky was interesting to look at. My dad bought me a very inexpensive telescope that I could look through.