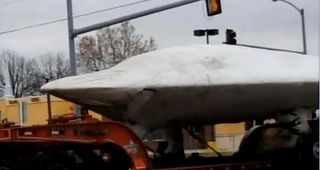 A few days ago, a "UFO" was spotted cruising down a main street in Cowley County, Kan. It wasn't in the skies, but instead being hauled on a flatbed truck driving down the middle of US Highway 77.

From at least one angle, the strange-shape aircraft resembled a saucer, and was covered by what appeared to be an industrial-strength tarp (or perhaps a badly malfunctioning cloaking device).

The vehicle, at about 30 feet across, was so big that local law enforcement had to remove roadside signs to allow safe passage — as well as some measure of security. Many locals suspected (or at least joked) that that it might have been a UFO or some top-secret aircraft. Local sheriff Don Read said he was not allowed to divulge much about the mysterious craft, though he did let slip the detail that it was not recovered at a crash site, but rather had been manufactured by the aerospace company Northrop Grumman.

Yet many people wondered why, if it was a known craft (even a secretive one), wouldn't the company simply fly the craft to its destination. Perhaps it needed repair or maintenance; but if so, wouldn't it be easier to bring the mechanics and parts to the aircraft, instead of taking it to the nation's highways? Speculation ran rampant, fueled by YouTube videos and news reports about the strange sight. [Hunter Captures UFO in Nevada]

Finally, a man named Brooks McKinney stepped forward to pierce the veil of mystery and conspiracy. McKinney, senior manager of public relations at Northrop Grumman, told Life's Little Mysteries that the suspected UFO was in fact an X-47B, an unmanned combat drone designed to operate from aircraft carriers.

The X-47B has an impressive wingspan of 62 feet (just over 30 feet with wings folded); a length of nearly 40 feet; and stands about 10 feet high on three wheels. The X-47B in the video was headed to a Naval air station in Maryland.

"We built two for the Navy, they were being tested at Edwards Air Force Base [in California] since March," McKinney said. "One is on its way to Maryland, and the other will remain in California." He took the UFO speculation in good humor, though, and understood the curiosity: "Clearly people are interested in what's going through town. It's unusual to see a shrink-wrapped aircraft, especially one with that shape."

The reason it wasn't simply flown across the country is deceptively simple: "It's difficult to fly an unmanned drone through commercial airspace," McKinney explained. Piloted aircraft are one thing, but long trips for large aircraft without a human pilot on board are frowned upon for both aviation security reasons and practical concerns.

On the other hand, perhaps the X-47B is just a convenient cover story, and it really is a captured flying saucer. We'll leave it to you to decide.

Benjamin Radford is deputy editor of Skeptical Inquirer science magazine and author of Scientific Paranormal Investigation: How to Solve Unexplained Mysteries. His website is www.BenjaminRadford.com.