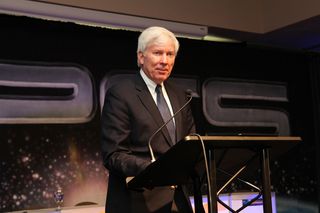 The commercial space industry in the United States is in its adolescence, growing by leaps and bounds while the federal government sometimes looks on as a watchful and worried parent. But one government agency — the Federal Aviation Administration (FAA), whose job it is to make sure the industry maintains safety standards and doesn't harm anyone on the ground — has decided in some ways to be a cheerleader for its teenage charge.

George Nield, the FAA's associate administrator for commercial space transportation, talked to SPACE.com at the recent International Symposium for Personal and Commercial Spaceflight in Las Cruces, N.M. Nield weighed in on misperceptions about commercial spaceflight, the difficulties of regulating such a new industry and what the future may hold in store.

SPACE.com: Do you think commercial spaceflight is inherently any less safe than traditional government-run spaceflight?

Nield: If you look at the Commercial Space Launch Act that Congress recently passed, it came right out and said spaceflight is inherently risky, so we need to acknowledge that. But also, all of the vehicles that have been built since the very first ones that have gone to space have been built by these companies, so there's no reason to think that it would need to be a less safe activity than for NASA to carry out.

NASA's a great organization — I worked there for many years — but if you look at the shuttle program, we had two fatal accidents in 135 launches. So I don't think it's fair to say, "Well, NASA's going to be safe, and anybody else is not going to be safe, so we'd better be real careful." That's probably not fair to the commercial community.

SPACE.com: Do you think the perception that commercial spacecraft might not be as safe is widespread, and something the industry is going to have to fight against?

Nield: I do. And that's just because people have come to associate space with NASA. That's understandable, because NASA has been such an important part of our nation's space program since the very beginning.

But that is changing now, especially during this period where the shuttle is being retired and NASA does not have any vehicles to fly to the moon or an asteroid or Mars. Then as we look around, it's going to be private industry that is taking people to the edge of space for the suborbital tourism and eventually to the space station. [Top 10 Fantasy Spaceships Headed for Reality]

SPACE.com: People here today were talking about having a cooperative relationship with the FAA. Do you think the relationship between regulatory agencies and spacecraft operators is changing now compared to how it used to be?

Nield: We get a lot of positive feedback once people have worked with us, because it appears that we are unusual in terms of a regulatory agency, in that we actually want them to be successful.

They need to follow the regulations and they need to be safe, but we're not trying to be a bureaucratic organization who just says no. We're trying to figure out how they can be successful. And I think once they understand that then it makes a big impression on them, and that makes it easier to work together.

SPACE.com: What are some of the differences when it comes to managing risks and maintaining safety within the commercial framework as opposed to the government?

Nield: The physics is the same, the engineering is the same, the technical principles are the same. But one of the differences that I think would be common is over time, NASA and similar organizations have developed, "This is how we do things," and so you write down checklists and procedures and flight rules and you put them on the shelf, and they're good. They've done a good job for us and they've allowed us to be successful.

Over time, though, technology marches on and there's new, better, fresher ideas out there. And if you don't pay attention to those, you're going to be stuck in the same way of doing business.

So one of the things that the commercial industry can bring to the table is, "I've got a better idea, I've got a different way to do it," and maybe it's safer, maybe it's cheaper, maybe it's more comfortable, maybe it provides greater capabilities, and that's going to be great to see.

If you look at the history of aviation, from the Wright Brothers, 50 years to 1953 — wow, we had hundreds of different companies building different kinds of airplanes, and some of them worked, some of them didn't, but we got all this great experience of what was good, what was bad, what was important and what's not. And that has enabled our aviation system to be the safest it's ever been, and a remarkably safe mode of transportation.

Fifty years after the first human went to space, here we are. Only 500 people have been to space, and how many different rockets are there in the world, how many different companies are working on this? So if we can get to the point where we've got multiple companies that are designing, building and operating rockets that bring people to space, that's going to be great.

SPACE.com: What is the role of government and the FAA in making sure safety is important in this process?

Nield: It's central to our mission. Our most important task really is to ensure the safety of the public during commercial launch and re-entry activities. Right now, that's what we're focusing on. If something goes wrong, we want to make sure that no one on the ground who didn't sign up for this exciting space ride gets impacted by that.

Congress has told us how they want to handle the question of people riding on the rocket, and that is, at least for right now, to fly under something they call "informed consent." So we know it's risky, but we want you to go in with your eyes wide open and understand those risks and those dangers, and if you still want to go, then OK, sign this piece of paper.

So that's our job really, to ensure the safety of the public, and then to make sure that the people who do fly on these vehicles, at least for now, are aware of the risks, and the companies are doing the best job they can to operate safely.

That's a good way to gain experience. Eventually, we'll be more like the aviation community, where we're specifying exactly how big it needs to be, what shape it needs to be, what kind of margins you need, and this is how to build a spaceship. We're not smart enough to do that today.

SPACE.com: But you see the space industry following the trajectory of the aviation industry?

Nield: I do, I think we're going to end up there after a number of years when we have enough experience to be smart enough to put those kinds of regulations in place.

Nield: That's a great question. Part of the answer is really up to NASA and what standards they plan to have for their astronauts.

We're certainly going to do our best to have safe operations, and we're working closely with NASA to make sure that even if our regulations aren't exactly the same as NASA's, at least they're compatible, at least they're consistent, so that somebody doesn't have to have one design for NASA flights and a different design for commercial flights, 'cause then the whole business model just isn't going to work.

I think realistically, everybody's going to do the best they can to make them as safe as they can. [Infographic: The Dangers of Human Spaceflight]

SPACE.com: Right now, does a commercial company have to get every flight approved by you, or every vehicle? How does that work?

Nield: The primary approval that we have for launches is a launch license, and when we first deal with a company that's building their rockets, then they would need a license for each mission that they want to fly.

After they've done a few and they’ve shown that they know what they're doing and they can operate safely, and we know what their objectives are, then we can give them an operator's license that is good for five years, and they can do as many launches as they want, and don't need a license for every single mission. We want to allow them an opportunity to show what they can do first.