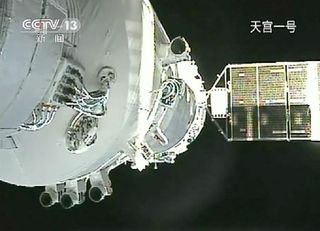 A robotic Chinese spacecraft that executed the nation's first in-space docking has separated from its orbital partner in preparation for a return to Earth tomorrow (Nov. 17), according to news reports.

Shenzhou 8 launched Oct. 31 on a mission to rendezvous and dock with Tiangong 1, which is also unmanned. The two vessels linked up on Nov. 2 and had been zipping around Earth together until this morning, save for a brief spell Monday (Nov. 14) when Shenzhou 8 detached for an hour, then re-docked.

Shenzhou 8's mission has been hailed as a big success in China, which regards it as a key milestone in the nation's march to build a 66-ton space station by 2020. The ability to link up robotic spacecraft in orbit is seen as a necessary step toward that goal.

After Shenzhou 8 touches down tomorrow, scientists and engineers will examine the vessel and analyze its data, officials have said.

Tiangong 1, which launched Sept. 29, will remain on orbit to await more docking partners. China plans to launch two more craft, called Shenzhou 9 and Shenzhou 10, toward the space lab in 2012. At least one of those missions will be manned, Chinese space agency officials have said.

The docking missions are part of China's ambitious human spaceflight plans. The nation is just the third country, after Russia and the United States, to develop spacecraft capable of flying humans to space and back. China has launched three manned space missions, one each in 2003, 2005 and 2008.