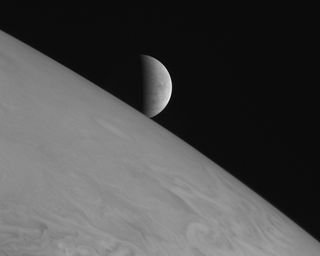 The icy moon Europa rising above Jupiter’s cloud tops. The picture was one of a handful of the Jupiter system that New Horizons took primarily for artistic, rather than scientific, value.
(Image: © NASA/Johns Hopkins University Applied Physics Laboratory/Southwest Research Institute)

One of the moon's most exciting features is an ocean of salty water thought to exist beneath its frozen surface. Because liquid water is thought to be necessary for life, many researchers hope microbial organisms may survive in this buried sea.

Overall, Europa is slightly smaller than Earth's moon, and is thought to have an iron core and a rocky mantle.

Speakers at the 1 p.m. EST briefing will include:

The event will be broadcast live on NASA Television.