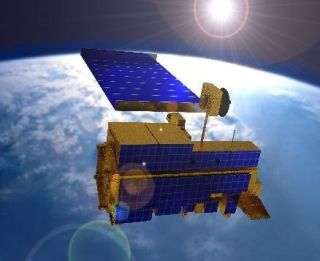 Hackers interfered with two U.S. government satellites four separate times in recent years, according to a congressional commission report to be released next month.

In October 2007 and July 2008, a NASA-managed Landsat-7 satellite experienced 12 or more minutes of interference, and a Terra AM-1 satellite was disrupted for two minutes in June 2008 and again that October for nine minutes, according to Bloomberg Businessweek's analysis of the annual report by the U.S.-China Economic and Security Review Commission.

The report says the hackers gained access to the satellites — both are used for Earth climate and terrain monitoring — through the Svalbard Satellite Station in Spitsbergen, Norway. It's believed the attackers may have hijacked the Internet connection at the Norway ground station to interfere with the operation of the satellites. [NASA Computer Hacked, Satellite Data Accessed]

In the case of the Terra AM-1, co-managed by NASA and the U.S. Geological Survey, "the responsible party achieved all steps required to command the satellite," Bloomberg Businessweek said, although the report says the hackers never fully took control of the satellites. The report did not go into further detail on the nature of the hacks.

The commission's report did, however, suggest that the Chinese military might have played a part in the hacks, citing Chinese military writings that advocate targeting enemy space systems, "particularly ground-based infrastructure, such as satellite control facilities."

In a statement, Wang Baodong, a spokesperson for the Chinese Embassy in Washington, denied the accusation, telling Bloomberg Businessweek that the commission has "been collecting unproved stories to serve its purpose of vilifying China's international image over the years," and that China "never does anything that endangers other countries' security interests."

Whoever was behind the hack, the fact that unauthorized parties compromised such high-profile targets underscores the severity of the threat cybercriminals pose to national security.

"Such interference poses numerous potential threats, particularly if achieved against satellites with more sensitive functions," the report said, according to CNET. "Access to a satellite's controls could allow an attacker to damage or destroy the satellite. An attacker could also deny or degrade as well as forge or otherwise manipulate the satellite's transmission."

This article was provided by SecurityNewsDaily, a sister site of SPACE.com.