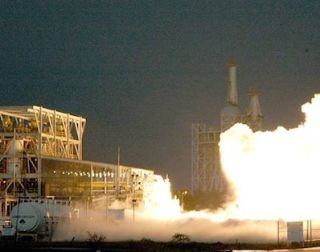 The AJ26 engine fired in Mississippi for about 54 seconds on Wednesday.
(Image: © Aerojet/Orbital Sciences)

WASHINGTON — Critical test launches of rockets and capsules NASA is counting on to deliver supplies to the international space station in the coming years are falling further behind schedule for both technical and logistical reasons.

Launches of Orbital Sciences Corp.’s Taurus 2 and Space Exploration Technologies Corp.’s Falcon 9 rockets, which until recently were scheduled for this year, are now expected to push into January and February, respectively, according to an internal NASA manifest. A second Taurus 2 flight, this one carrying Orbital’s Cygnus cargo module for the first time, is still officially scheduled for February, but the NASA manifest indicates a May launch date.

Both the Falcon 9 and Taurus 2, developed with funding assistance from NASA’s Commercial Orbital Transportation Services (COTS) program, are expected to begin making regular cargo runs to the space station starting in 2012. But the rockets and their associated cargo capsules first must successfully complete a series of COTS flight demonstrations intended to convince NASA and its space station partners that the new vehicles can safely do the job. [The Falcon and Dragons of SpaceX]

Both systems already are well behind schedule. Space Exploration Technologies (SpaceX) originally expected to complete three COTS flight demos by September 2009. Orbital, which received its COTS award two years after SpaceX, expected to complete what at the time was to be a single demonstration flight in December 2010.

Orbital Sciences spokesman Barron Beneski acknowledged that Taurus 2 is unlikely to make its maiden flight this year and said the company will publish an updated COTS launch schedule when it reports its latest quarterly financial results Oct. 21.

“As we have been consistent in saying, no one should be surprised if that updated schedule shows a slip to the right,” Beneski said Oct. 6 in an email. “This is a difficult and complex project. The current public schedule says the Taurus 2 test flight is scheduled for the very end of 2011, followed by the COTS demonstration flight right at the end of February. That was what our schedule of work was telling us in July when we reported the second quarter results.”

Orbital warned in July that completing and certifying rocket propellant pressurization facilities at the Taurus 2’s Wallops Island, Va., launch site was taking longer than expected and that the vehicle’s risk-reduction flight would be delayed about two months, to December, as a result.

“We’d simply point out that even a small schedule slip of a week or two would put the test flight into 2012, so that’s likely,” he said.

SpaceX, meanwhile, issued a statement Sept. 30 identifying Dec. 19 “as the first in a range of dates that we would be ready to launch.”

The day before, however, Elon Musk, the company’s founder and chief executive, told a National Press Club audience the company’s next launch would not take place until “more like January.” He attributed the delay to the schedule disruption resulting from the Aug. 24 loss of a Russia Soyuz rocket carrying a Progress cargo ship to the space station.

This will be the third flight of SpaceX’s Falcon 9 rocket and the second of its Dragon cargo capsule. SpaceX successfully launched the Falcon 9-Dragon combo in December, its first mission under COTS, and hopes to combine the objectives of the second and third planned demos in the upcoming flight, which if successful would enable the company to then proceed with space station cargo deliveries.

The internal NASA manifest shows that flight happening no earlier than February. While NASA has tentatively approved combining the two remaining demos, the agency’s partners, notably Russia, have yet to do so.

A NASA source said the February date is driven by the planned late-January launch of a Progress ship carrying hardware needed at the space station for Dragon berthing operations. That Progress mission, designated ISS 46P, is slated to lift off Jan. 26 and dock with the station Jan. 28, according to the internal manifest.

NASA’s latest public manifest, updated Oct. 6, indicates that the flight has slipped into December and says that the date is under review. NASA’s public manifest does not list any Progress flights beyond ISS 45P on Oct. 30.

Since signing its original $170 million COTS agreement with Orbital in December 2008, NASA has added 10 milestones worth a combined $118 million to the deal, including the risk-reduction Taurus 2 flight. SpaceX, whose initial 2006 COTS award was worth $278 million, has had 18 milestones totaling $118 million added since December, according to NASA spokesman Michael Braukus.

Both engines will be delivered to Wallops in early November, Mahone said. The Sept. 28 acceptance test was the first AJ-26 firing since one of the revamped Soviet-vintage engines caught fire on a test stand in June when a fuel line ruptured.

Meanwhile, Orbital is integrating a second Taurus 2 core stage it plans to test fire in November, assuming its Wallops launch pad is ready to go by then.