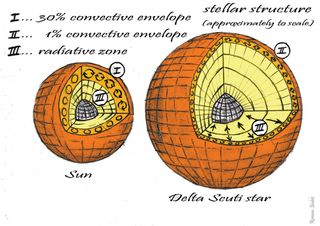 Comparing the interior of a Delta Scuti star to the sun. Notice how deep the convection layers run on solar-type stars, compared to the Delta Scuti. Although it makes up only one percent of the radius, astronomers think convection could help drive the pulsations on the variable star.
(Image: © Victoria Antoci)

Staring at the seething surface of a star is providing astronomers with clues as to its interior. The bubbling of the outer layers reveals a great deal about what's going on underneath.

Delta Scuti is a special class of pulsating stars that are twice the size of the sun. Astronomers have long known about the primary force behind their variations, called the kappa mechanism, in which ionization regions deep in the star store energy and release it as a valve.

However, new research reveals that these pulsing stars also utilize a second, sunlike option to brighten and dim, an option that can help determine more about what's happening in the unseen middle of the star.

Using NASA's Kepler space observatory, a team of international astronomers was able to examine the star — known as HD 187547 — for 30 days. They concluded that, despite its larger size, the convective forces at work in Earth's nearest star still function on more massive bodies, and even help drive their changes in brightness. [The Strangest Things in Space]

"In the earlier days, astronomers measured variable stars by looking through telescopes and writing down the intensity, comparing it to standard stars, but those stars had large brightness changes," Victoria Antoci, of the University of Vienna in Austria, told SPACE.com in an email.

The changes in brightness for HD 187547 were almost one-millionth that of what could be seen by the naked eye.

"Only measurements from space telescopes such as Kepler are capable of providing the needed accuracy," Antoci said.

Stars like the sun pulsate because of convection at their surface. As gas is heated, it bubbles up from beneath, where it expands, causing the star to very slightly brighten. This expansion cools the gas, which sinks back down, and the star dims again.

Gerald Handler, of the Nicolaus Copernicus Astronomical Center in Warsaw, Poland, compared the process to a pot of boiling water.

"When the water is deep, you have bubbles — or convection cells —  rising rather powerfully, and the whole pot can shake," he told SPACE.com via email.

Handler worked with Antoci on the paper, which was published online in today's (Sept. 14) edition of the journal Nature.

But astronomers weren't sure they would see the expected brightness fluctuations on Delta Scuti stars, which can be as much as four times the radius of the sun. The convection zone on these stars is significantly smaller — only 1 percent of their radius, compared to zones almost one-third of the radius of sunlike stars.

"We have now discovered the first star that shows both types of oscillation at the same time, slow and fast," said Handler.

Because the oscillations are governed by the physical structure of the star, it opens up new ways to examine star interiors.

"As we now have two independent types of oscillation that are caused in different interior regions, we can explore the stellar interior in much greater detail than previously possible."

The next step is to determine just how deep the convection goes.

"The question then is, how thin can the convection zone be, and how vigorous must it 'boil', to still cause oscillations of the star — or to cause the imaginary pot to shake," Handler said.

This should allow researchers to calculate the size of the core and the remaining radiative layers hidden under the bright pulsating surface, Handler said.