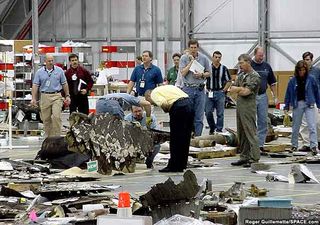 Debris from Columbia is examined by workers at the Kennedy Space Center on April 14, 2003.

This story is Chapter 2 in an 11-part series by Florida Today.

The rain never seemed tostop. The cold, the wet, the tired, hundreds of searchers huddled in bleachersof a rodeo arena in Nacogdoches, the small Texas town where many of theremnants of the destroyed shuttle Columbia had fallen to Earth.

Some came from the spaceprogram, like that fast-talking blond woman in the blue NASA ballcap shoutinginstructions. Most were not NASA people.

People from all walks oflife, most of them volunteers, came to help clean up after a national disaster.

Stephanie Stilson came from Kennedy Space Center, where she was in charge of readying shuttle Discoveryfor its missions.

Stilson, an energetic,fast-rising NASA manager from Cocoa, arrived in Nacogdoches two weeks after theaccident, overseeing one of the rural buildings the government took over in Texas and Louisiana to collect and sort out the pieces of Columbia.

It was the largestsearch-and-recovery effort in U.S. history, one that cost almost a half-billiondollars. Every morning, Stilson would give the same pep talk to her small shareof dedicated troops.

"Yesterday, we foundthis. Today, we really need to find that. You guys are doing great. Keep itup."

Tired as the searcherswere, Stilson had to force people to go home, especially the NASA folks seekingthe piece of the puzzle that might reveal what had gone so horribly wrong.

At least the NASA peoplehad hotels.

"There were tents everywhere. That's where they lived," said MichaelMohr, 38, a shuttle propulsion system engineer with United Space Alliance."They had to curl up in their tents in 20-degree weather, sleep, and getup the next day and go at it again."

Temperatures rarely topped freezing at night. There were no televisions orradios, no heat. Latrines and showers were trucked in on semitrailers. Still,searchers crawled out of sleeping bags at 5 a.m. every day and ate breakfast inwindswept mess tents.

They mounted horses to search sprawling landfills and rode all-terrain vehicleson a lookout for propellant-laced wreckage that could hurt some curiousonlooker. Some dove in ponds, lakes and reservoirs; others soared over thelandscape in contraptions called powered parachutes. A select few boarded 37helicopters enlisted to fly dangerous "low-and-slow" missions thatultimately claimed two lives and injured three others.

The search required 100-hour weeks to cover the 2,400-square-mile swath ofdebris roughly from Corsicana, Texas, to Fort Pork, La.All the while, everyonehoped not to be the one to stumble across "HR" -- code for humanremains.

Searchers worked until suppertime, with few breaks other than a brown-baglunch. "They really wanted to be the team that found the piece, whateverit was, that would answer the riddle," Mohr said.

A nippy morning offered a welcome break from the rain. For once, the sun peekedout from behind the clouds.

They were stretched out in a quarter-mile line, walking 10 feet apart, climbinga rising slope when they saw it. A black box that looked like a bulky old VCRlay out in the open next to the small crater it made when it crashed to Earth.

"NASA!" screamed a member of the team of about 40 forest rangers from Florida and a few space workers.

George Atkins -- a second-generation space worker who grew up with rockets onthe Space Coast -- could see tape spools through a broken side panel in themetal case. Other than ash-gray streaks, the box was in pretty good shape.

"I knew it was some type of recording device, and it had NASA markings onit, so I knew it was from the shuttle," said Atkins, 43, a married fatherof two from Merritt Island who works for shuttle contractor United SpaceAlliance. "I knew it was something important."

More important than Atkins could have imagined.

It was Columbia's Orbiter Experiments recorder, one of the "hotitems" sought by crash investigators.

The reason: Data stored on the reel-to-reel tape -- if retrievable -- mightconfirm a leading theory on the cause of the disaster.

Forty-six days had passed since the accident. Investigators suspected a chunkof external tank foam insulation hit Columbia's left wing 82 seconds afterlaunch, compromising the heat shield. But they didn't think the strike wasforceful enough to down a shuttle. But lacking forensic evidence, they startedto doubt they would ever determine with 100 percent certainty what caused thedisaster.

The 22-year old recorder, tucked into a bay below Columbia's crew cabin before itsfirst flight in 1981, was not designed to withstand a shuttle breakup or thefall back to Earth. But it did.

Engineers salvaged 9,400 feet of magnetic tape with data from hundreds ofsensors that measured strains, stresses, temperatures and pressures on theshuttle. Better yet, the recorder automatically turned on 15 minutes before Columbia began its descent and kept running until 18 seconds after 9 a.m. -- a full 47seconds after NASA lost contact with the crew and orbiter.

The black box changed the investigation.

The sensor data showed where the superhot gas got inside the wounded wing. Ittold the path the heat followed as it tore through the wing like a blowtorch.Investigators could recreate where and when the heat melted the aluminumframework, and ripped the ship to shreds.

The astronauts' belongings -- a helmet, a glove, a singed snapshot and othersobering items -- rode across Louisiana, Mississippi, Alabama and Florida in the passenger seats of the cabs.

Steve Altemus and Jon Cowart were among the shuttle managers assigned to"reconstruct" Columbia. Airplane investigators do it all the timewhen a jetliner drops from the sky. It's a lot harder when half of the aircraftis missing, burned up in the atmosphere or lost in wilderness somewhere between California and Texas.

Ultimately, the team got back about 40 percent of Columbia in more than 82,500pieces.

Skeptics wondered about the exhaustive effort to catalogue every suspectedshuttle piece. The occasional bizarre items shipped back to KSC -- a bowlingball, for instance -- bolstered doubters.

As the reconstruction team spread the pieces across a hangar floor, a patternemerged. They had more pieces of the right wing than the left wing, and thepieces were bigger. The KSC team built clear plastic molds of the front edgesof the shuttle's wings, replicas of the 22 taco-shaped panels that protect thefront of each wing from the extreme heat the ships endure re-entering Earth'satmosphere. Then, workers stuck inside the plastic model each piece of thereinforced carbon-carbon material from the panels, a sort of forensic jigsawpuzzle. The clue emerged over weeks.

If unfound fragments of the wing panels -- the ones that left holes in themodel -- had burned up or had come off first, there was only one conclusion:There was a big hole somewhere about the eighth or ninth of the 22 panels onthe left wing.

The science wasn't perfect, but it was another clue matching what most peoplealready suspected: There had been a hole in the same spot on the wing where thefoam had hit.

Scott Hubbard lowered his binoculars. He grabbed his gut.

"Oh my God," he mouthed, blinking his eyes. No sound came out.

Gasps erupted from the investigators, shuttle engineers and reporters in thebleachers.

Fifty yards away, investigator Hubbard's attempt to replicate what happened to Columbia ended in a split second.

An air cannon shot a briefcase-sized chunk of foam at a life-size orbiter wingat the very speed the debris hit Columbia after launch. No one neededbinoculars to see the result. The foam smashed a hole the size of a large pizzain the wing.

Hubbard dashed from the bleachers, not to where men were sticking their headand shoulders inside the hole to peek around, but to a bank of monitors nearby.He wanted to see the slow-motion video from cameras inside the wing. The filmsshowed the heat shield panel bending, then breaking, shards exploding all overthe inside of the wing. There was no doubt now.

We have our proof, Hubbard said. The foam did it.

Hubbard clicked the cell phone off, walked over to reporters and trumpeted theend of the physical part of the Columbia investigation. NASA was wrong. Almostsix months after the accident, in July, the board finally proved beyond a doubtthat foam could down a shuttle.

"We have found the smoking gun," Hubbard said.

NASA Administrator Sean O'Keefe did not agree with everything the ColumbiaAccident Investigation Board had to say in August 2003.

On top of that, mission managers clung to their assumptions, missingopportunity after opportunity to recognize the danger and try to do somethingto save the crew. And, investigators said, O'Keefe and his deputies put toomuch pressure on managers to meet a political deadline for finishingconstruction of the International Space Station. Staying on schedule dominatedas people made fateful choices before and during the flight.

Whether he agreed or not, O'Keefe knew seven astronauts were dead. Two billiondollars worth of irreplaceable space history was strewn across the countryside.It was time for a mea culpa.

O'Keefe and his handlers reached years into his past, to when President Bush'sfather tapped him to clean up the Navy after the Tailhook sexual harassmentscandal.

O'Keefe met the nation's press the day after the Columbia report came out withthe same three-word sound bite he uttered in his pledge to fix Tailhook.