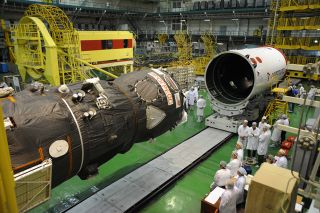 The Progress 44 spacecraft being assembled. All three of its modules are visible.
(Image: © RSC Energia)

Russia's Mission Control Moscow reported that communication with the Progress 44 cargo craft was lost shortly after its launch today (Aug. 24). The vehicle failed to reach orbit and crashed back to Earth. But what exactly was it?

Progress spacecraft are automated, unpiloted and single-use vehicles that have delivered fuel and supplies to the International Space Station three to four times each year since 2001.

The Progress spacecraft design was modeled after Russia's Soyuz space capsule, which carries astronaut crews to the ISS, but it is specially modified to carry cargo instead of people. Like the Soyuz, Progress vehicles are built to fly themselves but can also be remote-controlled by cosmonauts on the space station if required.

The robotic craft are about 24 feet (7 meters) long and nearly 9 feet (2.7 meters) wide, and consist of three modules. The first section is a pressurized forward module, which carries supplies to the space station such as scientific equipment, clothes, prepackaged and fresh food, and letters from home.

The present Progress craft — there have been several versions — can carry 1,700 kilograms (3,748 pounds) of such supplies. [Video: Launch of the Ill-Fated Progress Cargo Ship]

When the Progress docks itself at the space station, the crew unloads these supplies and then refills the cargo module with trash, unneeded equipment and wastewater for its return journey to Earth.

Progress also has a propulsion module, similar in design to the instrumentation/propulsion module on the Soyuz. This module contains the electronic equipment, or avionics, for the Progress' systems and sensors, allowing automatic docking to the space station. Progress' thrusters can also be used to boost the space station's orbit to a higher altitude, or change its orientation.

Lastly, Progress has a refueling module in place of the Soyuz descent module. Its eight propellant tanks can hold up to 1,740 kilograms (3,836 pounds) of fluid, depending on how much weight is carried in the cargo module. Four of the tanks contain fuel while the other four contain the fuel's oxidizer.

Like the Soyuz, Progress is launched atop the Soyuz rocket from the central Asian spaceport of Baikonur Cosmodrome in Kazakhstan. Since Progress vehicles are disposable spacecraft, they typically burn up over the Pacific Ocean upon reentry into the Earth's atmosphere.