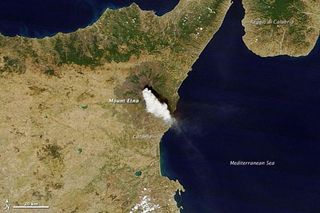 Throughout 2011, activity at Sicily's Mount Etna has been characterized by paroxysms: short, violent bursts of activity.

Each event has included volcanic tremors, ash emissions, and lava flows centered around the New Southeast Crater, just below the summit. On Aug. 12, Etna had its tenth paroxysm of the year, which was captured in a new natural-color image from NASA's Terra satellite. Etna spewed a thick white plume of gas and ash to the southeast, towards the nearby city of Catania.

The ash cloud was produced by vigorous lava fountaining at the New Southeast Crater. [See the Mt. Etna eruption photo from space]

Etna is the largest active volcano in Europe and one of the world's most well-known volcanic peaks. While 2010 was an exceptionally calm year for Etna, it is nearly constantly volcanically active and rarely a year passes without Etna erupting.

See all the latest action on the Etna's webcams.