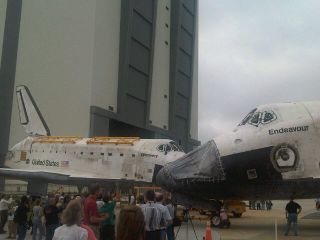 Two NASA space shuttles, each on the road to retirement, posed nose-to-nose Thursday (Aug. 11) while switching places at the space agency's Florida spaceport.

To stage the maneuver, NASA rolled Discovery out of the giant Vehicle Assembly Building at the Kennedy Space Center in Florida and moved it to a hangar-like building called the Orbiter Processing Facility-1, or OPF-1. Meanwhile, the shuttle Endeavour (which was already inside the hangar) was moved out and over to the massive VAB.

"Endeavour and Discovery switched locations — a shuttle shuffle," Kennedy Space Center spokesman Allard Beutel told SPACE.com. "It's just a storage thing, is what it comes down to — we have three shuttles and two locations." [Images: Two Shuttles Meet Nose to Nose]

When the two spacecraft passed one another on the same road, space shuttle shutterbugs went wild. The result: Never-before-seen photos of two-thirds of NASA's shuttle fleet in the same place at the same time.

"We've never had two shuttles pass each other to go to two separate locations," Beutel said. "This was the first time we've ever done this."

The two space shuttles, along with their sibling Atlantis, are being readied for retired life at museums now that NASA has finished flying the orbiters.

Thursday's double-shuttle move will allow technicians to work on Discovery inside the OPF-1 in preparation for shipping it to the Smithsonian's National Air and Space Museum's Udvar-Hazy Center outside Washington, D.C., around April 2012.

Work is also ongoing inside the nearby Orbiter Processing Facility-2, where Atlantis is being prepped for its retirement home at the Kennedy Space Center Visitors Center, down the road.

Atlantis was the last shuttle to fly; it landed July 21, finishing the 135th and final mission of the 30-year space shuttle program. Atlantis is due to travel almost seven miles to the Visitors Center in early 2013.

For the time being, Endeavour will rest dormant inside the VAB, which was where NASA stacked orbiters with their external tanks and solid rocket boosters in preparation for launch. Sometime next summer Endeavour will travel across the country atop a special Boeing 747 jet to the California Science Center in Los Angeles, where it will live out its days.

NASA named the three recipients of the flown shuttles earlier this year, crushing the hopes of about 20 other museums that had lobbied to host an orbiter. New York's Intrepid Sea, Air and Space Museum will also get a shuttle, the test vehicle Enterprise (currently housed at the Smithsonian), which never made it to space.

Before Discovery, Endeavour and Atlantis can be put on display, they must be processed to remove all hazardous parts and materials, especially any residual rocket fuel lingering in the Forward Reaction Control System and the Orbital Maneuvering Systems Engines.

Those systems have been removed and sent to the White Sands Missile Range in New Mexico for intensive cleaning. Once they are safe, they'll be shipped back and reinstalled on the orbiters before they are sent to museums.

"The entire system is completely cleaned out so there's not even a modicum of toxic chemicals left, so 20 years from now, someone standing under a shuttle doesn't get dripped on," Beutel said.