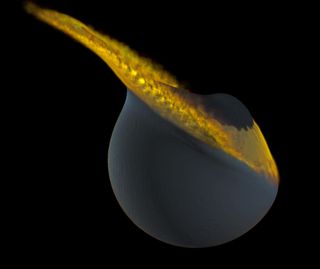 This computer illustration depicts a collision between Earth’s moon and a companion moon that is 750 miles wide and about 4 percent of the lunar mass. This late, slow accretion could explain the moon's farside highlands, scientists say.
(Image: © Martin Jutzi and Erik Asphaug )

A tiny second moon may once have orbited Earth before catastrophically slamming into the other one, a titanic clash that could explain why the two sides of the surviving lunar satellite are so different from each other, a new study suggests.

The second moon around Earth would have been about 750 miles (1,200 kilometers) wide and could have formed from the same collision between the planet and a Mars-sized object that scientists suspect helped create the moon we see in the sky today, astronomers said.

The gravitational tug of war between the Earth and moon slowed the rate at which it whirls, such that it now always shows just one side to Earth. The far side of the moon remained a mystery for centuries until 1959, when the Soviet Luna 3 spacecraft first snapped photos of it. (The far side is sometimes erroneously called the dark side, even though it has days and nights just like the near side.) [Video: The 2 Sides of the Moon (And What's On Them)]

The moon has two faces

The moon's far side is very different than its near side.

For instance, widespread plains of volcanic rock called "maria" (Latin for seas) cover much of the near hemisphere, but only a few maria are seen on the far one. In addition, while the surface of the near side is mostly low and flat, the far side is often high and mountainous, with the lunar surface elevated 1.2 miles (1.9 km) higher on average on the far side.

Now computer simulations hint a second moon essentially pancaked itself against its larger companion, broadly explaining the differences seen between the near and far sides. [10 Coolest Moon Discoveries]

Their calculations suggest this second moon would have formed at the same time as our moon. Scientists have suggested that our moon was born from massive amounts of debris left over from a giant impact Earth suffered from a Mars-size body early on in the history of the solar system. Spare rubble might also have coalesced into another companion moon, one just 4 percent its mass and about 750 miles wide, or one-third of our moon's diameter.

To imagine where this other moon once was, picture the Earth and the moon as being two points in a triangle whose sides are equal in length.

The other point of such a triangle is known as a Trojan point, or a Lagrangian point, named after the mathematician who discovered them. At such a point, the gravitational attraction of the Earth and moon essentially balances out, meaning objects there can stay relatively stably. The Earth and moon have two Trojan points, one leading ahead of the moon, known as the L-4 point of the system, and one trailing behind, its L-5 point.

The researchers computed that this second moon could have stayed at a Trojan point for tens of millions of years. Eventually, however, this Trojan moon's orbit would have destabilized once our moon's orbit expanded far enough away from Earth.

The resulting collision would have been relatively slow at 4,500 to 6,700 miles per hour (7,200 to 10,800 kph), leading its matter to splatter itself across our moon as a thick extra layer of solid crust tens of miles thick instead of forming a crater.

"It is entirely plausible for a Trojan moon to have formed in the giant impact, and for it to go unstable after 10 million to 100 million years and leave its imprint on the moon," study coauthor Erik Asphaug, a planetary scientist at the University of California, Santa Cruz, told SPACE.com. Imagine "a ball of Gruyere colliding into a ball of cheddar."

The remains of this Trojan moon would make up the highlands now seen on our moon's far side. At the same time, the impact would have squished an underground ocean of magma toward the near side, explaining why phosphorus, rare-earth metals and radioactive potassium, uranium and thorium are concentrated in the crust there.

A number of explanations have been proposed for the far side's highlands, including one suggesting that gravitational forces were the culprits rather than an impact from Francis Nimmo at the University of California, Santa Cruz, and his colleagues. Nimmo said that for now there is not enough data to say which of the proposals offers the best explanation for this lunar contrast. "As further spacecraft data and, hopefully, lunar samples are obtained, which of these two hypotheses is more nearly correct will become clear," Nimmo said in a statement.

Asphaug and his colleague Martin Jutzi at the University of Bern in Switzerland detailed their findings in the August 4 issue of the journal Nature.