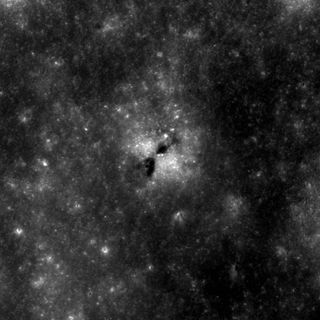 An odd-looking impact feature on the lunar surface that was seen by the Lunar Reconnaissance Orbiter Camera (LROC).
(Image: © NASA/GSFC/Arizona State University)

A strange-looking scar on the moon has astronomers wondering whether the cause of this peculiar impact feature is a piece of space debris that smashed into the lunar surface or a spacecraft that made a planned crash landing decades ago.

NASA's Lunar Reconnaissance Orbiter Camera spotted the curious impact using its narrow-angle camera, which has such a high resolution that it can often see small features from Apollo-era spacecraft that either landed or crashed. [See LRO's image of the weird moon crater]

The contrasting dark and light regions indicate differences in the composition and maturity of the lunar surface features, James Ashley, a postdoctoral associate at Arizona State University (ASU), wrote in a blog post about the LROC image.

Ashley suggests that the "butterfly-shaped" mass of lunar rubble seen in the picture could be the remnants of NASA's Lunar Orbiter 2, which made a planned crash landing on the moon in 1967 at the end of its mission.

The unmanned Lunar Orbiter 2 was a spacecraft used in 1966 to help scope out possible landing sites for the Apollo and Surveyor missions.

"According to the 2007 International Atlas of Lunar Exploration, the Lunar Orbiter 2 spacecraft was commanded to crash into the lunar far side surface on October 11, 1967," Ashley wrote.

The probe became well-known in 1967 when it returned a now-famous image of the Copernicus crater, which was dubbed the "Picture of the Century" by news media at the time. [Photos: Our Changing Moon]

The coordinates of the Lunar Orbiter 2's crash site is recorded as 119.1 degrees east longitude and 3.0 degrees north latitude. These figures are estimates, however, since the moon's far side is beyond the reaches of direct radio contact.

Yet, the estimated coordinates of the Lunar Orbiter 2's impact site match those from the LROC image (measured at 11.9.149 degrees east longitude and 3.020 degrees north latitude), Ashley said, indicating there could a link.

But there are still some unanswered questions.

For one, the impact appears too large to have been caused by a spacecraft that was only a few meters tall, Ashley said. Initial observations estimate that the rubble site measures about 280 feet (85 meters) across, but it's difficult to see the crater's rim in the image to gauge its true diameter, he added.

So, the evidence is inconclusive at the moment, but further analysis should be able to uncover some of the mysteries of this curious site on the moon.

"The truth is that we are not sure what caused this impact feature," Ashley wrote. "We are currently re-targeting the area under a higher incidence angle to help with crater rim measurements. Stay tuned!"