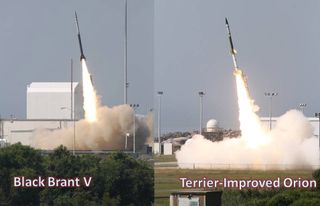 Rockets skirting right past the edge of space are probing mysterious electric currents found in the uppermost reaches of the atmosphere that can disrupt satellite signals.

Beginning about 50 miles (80 kilometers) above Earth's surface is an energetic, active part of the atmosphere known as the ionosphere. This area is filled with electrically charged particles such as protons and atomic oxygen created by extreme ultraviolet radiation from the sun reacting with air molecules.

At the base of the ionosphere, the movements of these charged particles, or plasma, create a pattern of electrical currents known as the atmospheric dynamo. These currents generally move in loops from the equator to the poles, changing daily based on solar heating and magnetic activity. But what keeps the dynamo moving is unclear. At the same time, winds of electrically neutral particles such as oxygen and nitric oxide molecules sweep through the lower ionosphere as well, complicating the picture.

Scientists want to learn more about the ionosphere because communications and GPS satellites beam signals through it, and disturbances in this region can distort signals. At the same time, "a better understanding of our own ionosphere will help us understand planets elsewhere in the universe — any planet with an atmosphere is sure to have these currents," said Rob Pfaff, the project scientist for NASA's sounding rocket program at Goddard Space Flight Center in Greenbelt, Md.

To investigate the ionosphere, scientists are launching four rockets from NASA's Wallops Flight Facility in Virginia for a five-minute journey about 100 miles (160 km) up into the atmosphere. (One set of rockets has already been launched, though data from them will take some time to analyze.) These rockets will collect data on the charged and neutral particles to learn how each affects the other to ultimately create the dynamo currents.

The two pairs of rockets are called sounding rockets — from the nautical term "to sound," meaning to measure. One in each pair, about 40 feet (12 meters) long and 17 inches (43 centimeters) wide, will carry instruments to measure data about the plasma as well as the neutral gas through which it travels. The others, about 6 feet (2 m) long and 14 inches (35 cm) wide, will shoot out a long trail of lithium gas with which to track wind movements.

"This experiment has never been done before," Pfaff said. "We've measured the dynamo currents using rocket probes, but we've never simultaneously measured the currents along with the upper atmosphere winds and the electric fields that drive the currents."

The launches will depend on weather and ionospheric conditions. Scientists will need evidence of currents in the ionosphere, as well as the clear skies necessary for successful observation of the lithium trails.

"We're studying a current that runs through the atmosphere much like the Gulf Stream moves through the ocean," said researcher Doug Rowland, a space scientist at NASA Goddard Space Center who helped design the mission. "In the Gulf Stream, a given parcel of water travels around the whole system, and the same thing happens with the plasma in the atmosphere. In general, during the day it travels in giant, horizontal loops from equator to pole and back."

The researchers want to see how these currents behave not just when the ionosphere is relatively quiet but also under relatively skewed conditions.

The first pair of rockets was launched on July 10, when the ionosphere was relatively quiet, and the next pair is now scheduled for launch in 2012 to allow time to study the results from this month's space shots. Ideally, the next launches will be duringconditions where the electric currents are reversed, a sign of changes in the electric fields and wind conditions of the upper atmosphere.

"The early rocket experiments of the '60s measured these currents, and then people felt they understood them and moved on, but in reality, whenever you look at the winds at night, they're much stronger than predicted, and we want to know why that is," Pfaff told Our Amazing Planet.

This story was provided by OurAmazingPlanet.com, a sister site of SPACE.com. Follow SPACE.com for the latest in space science and exploration news on Twitter @Spacedotcom and on Facebook.