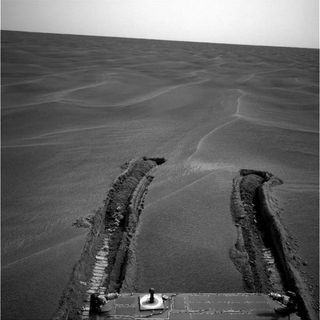 Mars rover Opportunity is imaging its sandy surroundings. Ground controllers want to understand why the robot got stuck in sand dune.
(Image: © NASA/JPL.)

Amilestone has been reached for those hard-at-work red planet rovers, Spirit andOpportunity. Late last week, groundcontrollers hit 1,000 sols of working with the robots on the surface of Mars. Asol is durationof a solar day on that faraway planet.

On June 9, Opportunityhit 490 sols and Spirit attained 510 sols since their independent landings inJanuary 2004.

In his Cornell-based website on the Mars rovers, Squyres noted that theEarth-to-Mars uplink process - controlling the robots across interplanetaryspace - "is intense, engrossing and exhausting."

"Goodthings are happening on both sides of the planet," Squyressaid, in terms of robot operations.

AtMeridiani Planum, theOpportunity Mars rover is now free of a sand dune that halted its movement forfive weeks. "At Meridiani, we'll soon begin our firstmaneuvers to reorient the rover so that we can study the feature that gotus...and then be on our way again," Squyres said.

"Weweren't calling it anything back when we were stuck in it, but now that we'reout, it seemed there ought to be a name for the thing," Squyresexplained.

Arethere any bestguesses of why that particular dune snagged the rover, and are other sand trapslurking in the area? "No guesses," Squyres told SPACE.com. "We're going to collect dataand then think hard about it...not try to guess."

What information would imagery of Purgatory Dune provide rover groundcontrollers and scientists? There's need to look at grain size, detailedtopography, whether or not the dune has a crust - and if it does have a crust,what that crust is made of, Squyres said. "Basically,everything we can safely learn about it that might be of some help in thefuture."

Spirited spiral: up and to the right

Onthe other side of Mars from where Opportunityrests, the Spirit rover is doing survey work within the Columbia Hills at Gusev Crater.

Spiritis scoping out which way rocks there are tilted. There are very interestingoutcrops in an area dubbed "TennesseeValley", and some "reallygood-looking stuff" on the far wall of the valley, Squyressaid.

TheSpirit rover team has decided to head up on a section tagged as "Husband Hill".

"We'renot going to try a frontal assault this time. Instead, we're going to spiral upand to the right, working both upslope and also cross-slope simultaneously.Whether we'll actually reach the summit is an open question at this point. Butwe're convinced that the route we've chosen offers the quickest path to a viewof whatever's on the south side of the hill... and that's what we want to seenext," Squyres concluded.