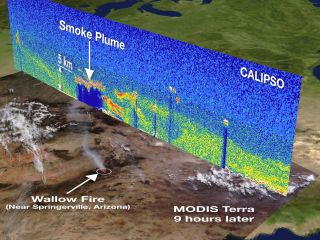 This image from NASA's Calipso satellite is a vertical profile from space that shows the June 3, 2011 smoke plume from the wildfires currently raging in Arizona. Here it is overlaid on an image captured by the Moderate Resolution Imaging Spectroradiometer (MODIS) instrument on the Terra satellite nine hours later. Calipso took its 3 billionth image on June 2, 2011.
(Image: © NASA/Kurt Severance, Jason Tackett and the CALIPSO team)

A 5-year-old NASA satellite has hit a mindboggling milestone high above Earth: The spacecraft snapped its 3 billionth image of the planet … that's right, 3 billion.

The prolific Earth-observation satellite, called CALIPSO, took the image on June 2 using laser and infrared ranging instruments and has since gone on to take more imagery. A June 3 image from the satellite shows a vertical look at the massive smoke plume from the wildfires in Arizona.

Since its 2006 launch, the CALIPSO satellite has traveled more than 750 million miles (1.2 million kilometers) as it orbits the Earth, NASA officials said in a statement. The amount of data and images it has recorded would fill 10,500 DVDs or 75,000 CDs, they added. [CALIPSO's image of Arizona wildfires]

"That we are still making measurements after five years is a testimony to the hard work and dedication that the many engineers and scientists gave to make this a reality," said CALIPSO project scientist Chip Trepte of NASA's Langley Research Center in Hampton, Va.

The $223 million CALIPSO satellite takes its name from the bulky moniker Cloud-Aerosol Lidar and Infrared Pathfinder Satellite Observation. It uses a laser-based lidar instrument to monitor how Earth's clouds and particles in the atmosphere affect the planet's warming and cooling patterns.

CALIPSO's lidar instrument sends out 20 laser pulses every second, with each pulse lasting only 20 billionths of a second long, to study Earth's atmosphere. That sounds like a lot of measurements, "but if you add all the pulses up, the laser has only produced light for one minute," Trepte said.

The instrument takes vertical measurements between the satellite and the Earth's surface. NASA scientists call the images it generates "vertical profiles."

CALIPSO is one of several spacecraft that make up the international "A-Train" constellation of Earth-observing satellites. There are five satellites, all flying in train-like formation, in the A-Train constellation.

"CALIPSO is continuing to provide very valuable information about climate, the weather, and air quality. We now know where the layers of pollution are and how they move over the globe. We didn't know that five years ago," Trepte said. "Before, we had the ability to look at clouds just like you see on the Weather Channel - and we didn't know what altitudes they were at, or the numbers of layers they had. After five years of data we really have a very good idea of how these clouds systems look."

The CALIPSO mission is a joint effort by NASA and the French space agency.