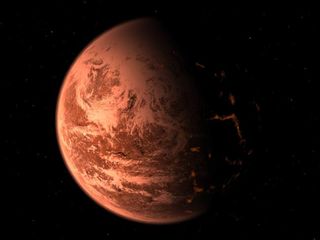 Artist's conception of the newly discovered planet around Gliese 876 -- it is shown as a hot, rocky, geologically active world glowing in the deep red light of its nearby parent star.
(Image: © Trent Schindler, National Science Foundation.)

Astronomersannounced today the discovery of the smallest planet so far found outside ofour solar system. Aboutseven-and-a-half times as massive as Earth, and about twice as wide, this newextrasolar planet may be the first rocky world ever found orbiting a starsimilar to our own.

"Thisis the smallest extrasolar planet yet detected and the first of a new class ofrocky terrestrial planets," said team member Paul Butler of the CarnegieInstitution of Washington. "It's like Earth's bigger cousin."

Currentlyaround 150 extrasolar planets are known, and the number continues to grow. Butmost of these far-off worlds are largegas giants like Jupiter. Onlyrecently have astronomers started detecting smaller massed objects

"Wekeep pushing the limits of what we can detect, and we're getting closer andcloser to finding Earths," said team member Steven Vogt from theUniversity of California, Santa Cruz.

Thediscovery of Earth's distant cousin was announced today at a press conferenceat the National Science Foundation in Arlington, Va.

Thenew planet orbits Gliese 876,an M dwarf star 15 light years away in the constellation Aquarius. The "super-Earth" is not alone: there are two other planets - bothJupiter-sized - in the same system. This third world was detected by a tiny extrawobble that it caused in the central star.

Fromthis wobble, the researchers measured a minimum mass for the new planet of 5.9Earth masses. The planet orbits makes afull orbit in a speedy 1.94 days, implying a distance to the central star of 2million miles - or about 2 percent of the distance between the Earth and theSun.

Orbitingso close to its star, scientists speculate that the planet's temperature is atoasty 400 to 750 degrees Fahrenheit (200 to 400 degrees Celsius). This is likely too hot for the planet toretain much gas, like Jupiter does. Therefore, the planet must be mostly solid.

"Theplanet's mass could easily hold onto an atmosphere," said Gregory Laughlinfrom UC Santa Cruz. "It would still be considered a rocky planet, probablywith an iron core and a silicon mantle. It could even have a dense steamy waterlayer."

A paper detailing these results has been submitted to The AstrophysicalJournal.