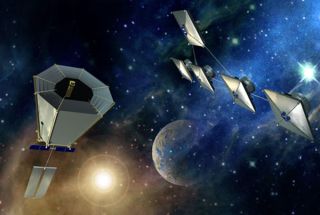 Not mad as in 'crazy,' although many scientists thought he was nuts when he first started hunting for planets orbiting far-distant stars over 20 years ago.

Now that over 500 exoplanets have been detected and the Kepler space telescope has over 1,200 candidate planets waiting to be confirmed, Marcy's dedication and hard work (and his sanity) have been vindicated.

But Marcy is still mad at NASA for canceling exoplanet missions like the Terrestrial Planet Finder (TPF) and the Space Interferometry Mission (SIM). He's also angered by what he sees as a lack of leadership and cooperation for exoplanet missions within NASA and the larger astrophysics community. [Gallery: The Strangest Alien Planets]

Marcy expressed his ire at a recent exoplanet symposium hosted by MIT planetary scientist Sara Seager."I'm unhappy about the last 10 years, and the next 10 years," he said.

While the Kepler mission has been a huge success, and potentially will allow astronomers to discover a truly Earth-like planet, Marcy mourns the loss of other missions that would've helped characterize exoplanets, as well as find planets that Kepler could never detect.

"I think the case for TPF is more compelling thanks to Kepler," Marcy said.

The goal of TPF had been to study all aspects of exoplanets — according to a NASA web site, "from their formation and development in disks of dust and gas around nearly-forming stars, to their suitability as abodes of life."

Marcy criticized the 2010 astronomy and astrophysics Decadal Survey, an influential review complied by the National Research Council that recommends missions for space science over the next ten years.

"TPF was not even mentioned in the Decadal Survey," he said. "How is this possible?"

The previous Decadal Survey, released in 2001, had recommended that NASA proceed with TPF, with the caveat that astronomers first had to determine that terrestrial planets are common around sun-like stars. Data from Kepler and other exoplanet studiesindicate that this may in fact be the case. [Infographic: Stacking Up Alien Solar Systems]

Marcy said that part of the blame for the current lack of large exoplanet missions should be placed on the scientific community, which did not advocate more strongly for TPF. Not too long ago, TPF was considered the most important and exciting mission for exoplanet science.

"I think TPF is our human genome project,” said Marcy. Without such a mission to help identify exoplanet characteristics, planet hunters become census-takers, just as astronomers 100 years ago counted the stars and put them into star category plots. "Now we count planets and put them into a period/radius diagram," he said.

Marcy said the astronomy community lost 10 years due to internal squabbling over which missions should receive funding. TPF scientists battled SIM scientists for supremacy, and then in 2004, when NASA decided to split TPF into two different missions — one with a coronagraph (TPF-C) and one with an interferometer  (TPF-I) -- the problem only grew worse.

The coronagraph and interferometer each would block light from a star in order to detect any planets orbiting them.

The TPF-Interferometer would've had several small telescopes, either on a fixed structure or on separated spacecraft floating in formation, that looked for the infrared emission, or heat, from exoplanets. The TPF-Coronagraph would’ve used a single large mirror to collect the very dim reflected visible light from exoplanets.

In 2007, NASA deferred both TPF missions "indefinitely" due to budget constraints.

"Free-flying interferometers in space are the only plausible future for astrophysics," Macy declared. He felt coronagraphs were not the best option, but noted that NASA saw it differently and supported TPF-C at the expense of other exoplanet missions. "Lots of interferometers and radial velocity missions got junked."

He said that some in the community, notably Roger Angel of the University of Arizona, had advocated for a cheaper, scaled-down version called TPF-Lite, but this was rejected because many feared it would eliminate motivation for a bigger TPF mission.

"So now, we have nothing," said Marcy.

For awhile it looked like SIM was the last mission standing when it came to large-scale exoplanet missions after the cancelation of TPF. SIM would have surveyed the closest 100 stars, looking for planets of a few Earth-masses, using astrometry: the precise measurement of star movement caused by planetary orbits.

A scaled-down version, called SIM-Lite, wasnot recommended by the 2010 Decadal Survey for development.  Because of this, and despite the years of study and the $600 million NASA already had invested in the mission, SIM was canceled.

Marcy said there hasn't been any meaningful discussion about lessons learned after the downfall of TPF and SIM.

"Where’s the insight?" he asked. "What's the culture that allows mistakes like this to happen?"

Wesley Traub of the Jet Propulsion Laboratory seemed eager to address these criticisms. He jumped to his feet after Marcy spoke, and only reluctantly agreed to wait for the scheduled question-and-answer period.

Traub defended TPF-C, saying it had the advantage of being a single telescope that didn’t need to be cooled. However, he felt the switch in focus for TPF from interferometry to a coronograph was mainly due to perception than science. [Video: Kepler Reveals Lots of Planets: Some Habitable?]

Calling the history of exoplanet mission development a "sociology experiment," Traub said that interferometers were simply not popular -- they didn’t employ enough people, and students wanted to collect data, not dedicate their time to building a new instrument.

But Traub, who worked on both SIM and TPF and is currently Chief Scientist for NASA's Exoplanet Exploration Program, also shared many of Marcy’s concerns about the state of exoplanet missions. Speaking about the cancellation of SIM, Traub said, "That was the most embarrassing thing I've seen in my life."

David Charbonneau, of the Harvard-Smithsonian Center for Astrophysics and a Kepler team member, spoke in support of the Decadal Survey. "If you're frustrated, read all the white papers."

Charbonneau said they reveal the caustic in-fighting that was taking place within the community which resulted in missions like SIM-lite not being recommended. Another problem, he said, was the lack of external cost evaluations, which could’ve helped in judging which missions were fiscally possible.

It was left to the symposium moderator, Sara Seager, to put in a good word for NASA, and she pointed out that the space agency had supported everyone gathered there that day. She also said that the current situation called to mind Abraham Lincoln’s phrase, "A house divided against itself shall not stand."

Summing up the history of mission development, Seager said, "In exoplanets, we divided and got conquered."

The symposium, "The Next 40 Years of Exoplanets," took place May 27 at the Massachusetts Institute of Technology in Cambridge, Mass. This full day of talks also included discussions about astrobiology, Sara Seager's ExoPlanetSat, Geoff Marcy's call to send a mission to Alpha Centauri, and many other topics of relevance to exoplanets.