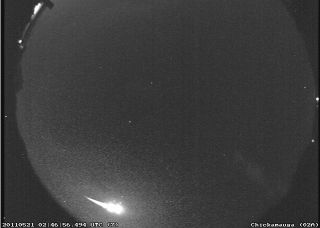 This shot from a NASA fireball-watching camera shows a meteor over Macon, Ga., on the evening of May 20, 2011.
(Image: © NASA/MSFC/MEO)

A brilliant meteor blazed through the sky above Georgia recently, and two NASA fireball-monitoring cameras caught the dramatic display on video.

The meteor was caused by a human-size chunk of an unknown comet. It was the brightest meteor yet recorded by NASA's fireball-observing network — based at Marshall Space Flight Center in Huntsville, Ala. — in its nearly three years of operation, officials said.

Two NASA all-sky cameras, both located in northwest Georgia, tracked the resulting meteor and captured it on video. Analysis of the videos allowed scientists to calculate the basics of the object's speed, trajectory, mass and orbit.

When it entered the atmosphere, the comet chunk was traveling northwest at about 86,000 mph (138,404 kph), researchers said. At this velocity, the boulder-size "dirty snowball" possessed an energy or striking power somewhere between 500 and 1,000 tons of TNT.

But that striking power was never realized on the ground. The Macon meteoroid was too small, and made of the wrong kind of stuff, to survive the trip through Earth's atmosphere, researchers said. Indeed, the video shows four distinct flares emanating from the comet chunk as it broke apart multiple times.

After a last burst of light, the meteor burned up completely 38 miles (61 km) above the town of Villa Rica, Ga., officials said.

The Macon meteor qualifies as a fireball, which is officially defined as a meteor that shines brighter than Venus in the sky.

Fireballs like the May 20 event are impressive but not terribly unusual. Objects as big as washing machines typically fall into Earth's atmosphere on a monthly basis, but most of them burn up before reaching the ground. Many of the resulting fireballs are not seen because they occur over remote areas or over oceans (which cover more than two-thirds of Earth's surface).

NASA's meteor-watching network, run by the Meteoroid Environment Office at Marshall, currently consists of four robotic cameras: the two in Georgia, one in Huntsville, and one in southern Tennessee. These "smart" cameras are linked into a computer system that automatically analyzes their video, then calculates relevant information about incoming space rocks' trajectories and orbits.

Researchers hope to place a total of 15 such cameras in various locations throughout the eastern United States, which has few such systems, NASA officials said.

The overall goal of the camera system is to learn much more about the pieces of space rock that strike Earth and our atmosphere — how big they are, what they're made of and where they come from, researchers have said.