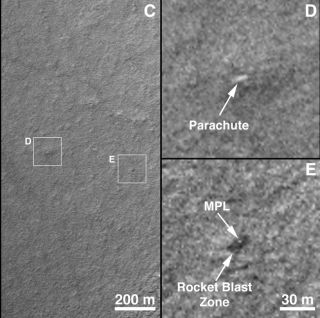 Image of possible Mars Polar Lander sites. Image D is identified as the spacecraft's parachute, while Image E is the lander itself. Further imaging and analysis will take place later this summer. Image
(Image: © NASA/JPL/MSSS)

In a game of high-altitude hide and seek, Mars orbiting spacecraft are scouting for telltale signs of a botched lander mission from more than five years ago.

Finding the whereabouts of the probe, NASA's Mars Polar Lander might offer some clues about its true fate. But there is a good scientific reason to spot the wreckage as well - a motive tied to life on the red planet.

The spacecraft failed to phone home after its attempted landing at the planet's south pole on December 3, 1999. What really happened to the vehicle on approach can only be second-guessed.

A photo reconnaissance search for the lost-to-Mars craft was undertaken by Malin Space Science Systems (MSSS), Incorporated of San Diego, California. MSSS developed, built and now operates the Mars Orbiter Camera on the veteran Mars Global Surveyor that's been circling around the planet since September 1997.

Using the Mars Global Surveyor, MSSS analysts have taken dozens of images of the landing site. Their hunt may have paid off.

Experts at MSSS have discerned what could be the Mars Polar Lander's parachute, even discolored martian soil that, perhaps, was caused by the probe's engine blast, and possibly a tiny bright spot near the center of the disturbed landscape that might be the lander.

It's a speculative view at best. The interpretation is as full of certainty that a "might be", "perhaps", and "maybe" can offer.

But according to MSSS and its leader, Mike Malin, techniques used to locate the Viking and Pathfinder landers -- along with catching sight of the telltale doings of Spirit and Opportunity Mars Exploration Rover activity - have led to the thought that Mars Polar Lander has been found.

Furthermore, now that a prospective site for Mars Polar Lander is branded, Mars Global Surveyor is set to acquire new imagery of the locale - this time using a scheme called image-motion compensation. The method yields a threefold increase in Mars Orbiter Camera resolution of select targets.

Meanwhile, at the south pole setting where Mars Polar Lander came to rest, the landscape has begun to be liberated from a blanket of seasonal carbon dioxide frost. That action, coupled with Mars Global Surveyor overflight, could well shed information on the puzzling disappearance of Mars Polar Lander.

"I hope he gets the picture he wants!," said John Rummel, the NASA Planetary Protection Officer at the space agency's headquarters in Washington, D.C.

The expanded capability that Mike Malin and the Mars Global Surveyor team has managed to get out of the spacecraft and Mars Orbiter Camera combination "is really amazing," Rummel told SPACE.com. "And it is significant that they are working to fix the location of our past contributions to the martian landscape."

"The failure of the Mars Polar Lander spacecraft," Rummel explained, "may have contributed limited numbers of Earth microbes to the martian environment,"

"So establishing the location of the crash site is an important thing to do to ensure that MPL-associated microbes -- even the dead ones -- are not mistaken as Mars life by future explorers, and that we know where any future remediation efforts can be focused if they prove necessary to our future on the planet," Rummel said.

Window into the subsurface

Finding the Mars Polar Lander could help grasp why it vanished in the first place.

That's the thought from Richard Zurek, the MPL project scientist from the Jet Propulsion Laboratory (JPL) in Pasadena, California. He has that same science title for NASA's next outbound craft for the red planet - this time, the Mars Reconnaissance Orbiter. It is slated for an August liftoff and totes a super-zoom camera system that is ideal for spying in on the Mars Polar Lander's final stop.

Zurek said that confirming that the probe didn't land on a steep slope or knowing that the parachute was open and detached would rule out some of the lower probability, but still plausible, failure theories.

"What would be fascinating and ironic is if the MPL crash landing has opened a window into the subsurface of the polar terrain for all our orbiters to observe. It would ease the pain of a mysterious end to a scientifically valuable -- and audacious -- mission," Zurek added, noting that his opinions are his own and do not represent JPL's view or policy.

Thanks to Malin and his colleagues, the chance of shrinking down the large error ellipse for Mars Polar Lander's arrival area to prime real estate is good news, Zurek said. Taking scads of high-resolution data while scanning aimlessly for the craft may not be necessary.

"Even at Mars Reconnaissance Orbiter data return rates, these data bits are precious and there is intense competition given the multitude of science objectives to which they can be applied. Thus, having a good starting point is crucial to an efficient search," Zurek pointed out.

Zurek added, however, that it will still be a challenge to detect Mars Polar Lander. And that's even if the spacecraft is really where imagery suggests it is. Given the Mars years that have since passed, one has to take into account that the lander's resting spot is a region of frequent local dust storms.

Has the dark splotch seen disappeared under a thin coating of bright, fine dust?  Or do the winds continue to strip that dust away from a surface made rough by Mars Polar Lander's crash? These are questions that Zurek noted are unanswered at present.

The polar layered landscape into which Mars Polar Lander was diving towards remains intriguing for scientific study, as such terrain may contain a physical record of past climate change on Mars, Zurek said. "So, there will be observations of the stratigraphy [study of rock layers and layering] and composition of these regions by Mars Reconnaissance Orbiter."

Why did Mars Polar Lander fail?

Investigators of the mishap later pinpointed the most likely cause of the failure. The leading candidate: creation of spurious signals when the craft's legs were deployed during descent. Onboard brains of the lander took the faulty signals as indication that touchdown on Mars had taken place. Software then commanded the craft's set of braking engines to turn off.

But in reality and still high above the terrain - estimated to be 130 feet (40 meters) in altitude - Mars Polar Lander saw a premature shutdown of engines critical to a safe and sound full-stop on the red planet. The result would have been a rough landing.

"You're going to hit pretty hard," said Steve Jolly, who served as flight systems engineer for Mars Polar Lander at Lockheed Martin Space Systems near Denver, Colorado. He is now chief engineer for the Mars Reconnaissance Orbiter at the aerospace firm.

Flaw in the code

"The lander was as robust as we could make it. But it was very lightweight...a rather delicate structure," Jolly told SPACE.com. "So most of us don't believe that, if it plummeted that far, it would be able to do anything...certainly not be able to call home."

Jolly envisions that the Mars Polar Lander's wire harnesses and boxes of electronics and equipment couldn't stand up to the g-forces from a harder-than-planned landing. The probe's legs would have likely crushed too.

"The whole thing would essentially implode on itself when it hit," Jolly said.

As for the cause of the crash, the investigation's findings are reasonable, Jolly said.

"That's because we know there's a known flaw in the [software] code that we found," Jolly advised. "That is why we have such a high confidence that the real cause was found...and we are moving on to correct that for future landers."

But then there's the Mars Global Surveyor imagery that seems to show a single, small "dot" at the center of the mussed-up landing location - suggestive that Mars Polar Lander stayed more-or-less together after its fall.

And what about that stirred up soil? Maybe the engines worked as billed, blasting away just above the ground.

For one, the disrupted area looks big for something that stopped firing so high. Secondly, that white spot - conceivably the lander -- is well centered. Would it have plopped down right smack in the center if the engines cut out at a high altitude?

"The one thing we didn't know is what the soil conditions were really like," Jolly responded. "It's a weird place on Mars...so when the lander fell and hit the ground, it might have made a mark like that."

Jolly said that discovering the site of Mars Polar Lander is of great personal interest. "It has less engineering interest...but certainly all of us that worked on it are excited about what Malin is doing. We want him to keep improving that resolution so we can see it," he concluded.

Jeff Slostad formerly headed a JPL team that worked for four years on Mars Polar Lander's robotic arm. He also served as a systems engineer for the lander's entire payload.

"I can't say that I don't agree with the software issue regarding the leg deployment as being something that likely caused a fatal landing. Based on my experience...even if that hadn't happened, I was not expecting everything to go smooth," Slostad recalled.

As one of NASA's faster, better, cheaper missions, the Mars Polar Lander project lacked in realistic tests, Slostad explained. And when the lander's multiple instruments were operated simultaneously in pre-launch tests, the spacecraft's central processing unit would sometime start to bog down. "It would either slow way down, freeze, or just crash," he said.

"Part of the problem was that the software had a bunch of diagnostic stuff in it that was making the problem worse. Part of it was that we didn't have an adequate number of testbeds to do all of the development that was needed...purely a budget issue. Part of it was not enough people...again, a budget issue. And a big part of it was that we just didn't have enough time. The start date for the project should have been five to seven years before the launch window, not four years," Slostad suggested.

The government, industry and university team for Mars Polar Lander was top notch, Slostad said. "We just didn't have the resources available to get the job done right. Faster, better, cheaper was the culprit."

Since the loss of Mars Polar Lander, Slostad added, the lessons learned from the failure have been embraced at JPL.

"Personally, I would be most upset to find out that it landed safely and is just sitting there waiting to get to work," Slostad concluded.