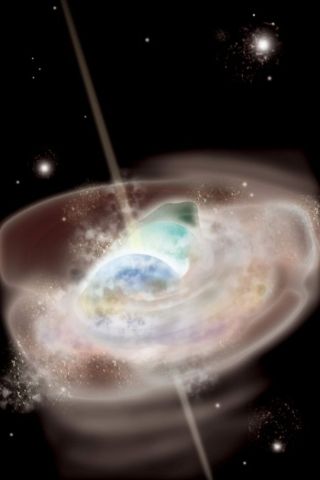 An artist's impression of merging neutron stars, one of the theoretical progenitors of gamma-ray bursts and the birth of a black hole.
(Image: © NASA, Sonoma State University, Aurore Simonnet)

The biggest pops in the universe are becoming less of a puzzle. Although previously suspected, astronomers now have clear evidence that the fireworks come in separate varieties.

About once a day, a random spot in the sky flashes in gamma rays - the most energetic part of the light spectrum. These so-called gamma ray bursts (GRBs) very briefly shine as bright as a million trillion suns. They have been mysteries ever since they were first detected in 1967 by satellites monitoring the ban on nuclear arms testing.

There have been many theories to explain GRBs. The two main contenders are that GRBs arise when a massive star blows itself apart, or, alternatively, when the ultra-dense remnants of dead stars collide with each other.

Two recent observations - one of an X-ray glow following a burst and another of jets blowing out of a dying star - appear to let GRB theorists have their cake and eat it too. That is, there may be room in the GRB world for both stellar explosions and mergers. The findings support a realization that has grown in recent years suggesting the bursts have at least two origins.

The long and the short of it

Even before the new discoveries, astronomers chose to classify GRBs by their duration - separating long ones, lasting more than two seconds, from short ones.

The long GRBs are better studied because other telescopes have time to slew towards these targets before they disappear. The follow-up observations have shown that some GRBs glow at longer wavelengths, like X-rays and visible light. These afterglows have helped astronomers accurately pinpoint the location of certain GRBs.

Thanks to these more accurate positions we now know that the long GRBs come predominantly from outside our galaxy. Some of the sources appear to be in very, very distant galaxies.

But no afterglow had ever been seen for a short GRB, so their origin remained more of an open question.

Recently, however, the SWIFT spacecraft - a dedicated GRB hunter launched in November of last year - caught the first X-ray afterglow from a short GRB. It was a weak signal that lasted only about five minutes, but it was enough to nail down the burst's origin: a relatively nearby galaxy, 2.7 billion light years away.

"Seeing the afterglow from a short gamma-ray burst was a major goal for Swift, and we hit it just a few months after launch," said Neil Gehrels of NASA's Goddard Space Flight Center. "For the first time, we have real data to figure out what these things are."

The fact that there was no afterglow seen in visible light argues for this burst being the result of a merger between two neutron stars, two black holes, or a combination of the two.

These strange objects are the tightly-sealed coffins of long-dead stars. Smashing two of them together would unleash a great deal of energy, but there would be very little surrounding gas or dust, which is thought to fuel the long afterglow of other GRBs.

Further support for a merger is found in the advanced age of the galaxy that hosts this short GRB. An old population of stars should have a lot of neutron stars and black holes in their midst, so collisions are more likely.

"We are combing the region around the burst with the Keck Telescope in Hawaii for clues about this burst or its host galaxy," said Shri Kulkarni from the California Institute of Technology. "What we are seeing so far is what proponents of the merger theory have been saying all along."

A second result provides verification for a very different mechanism for making GRBs.

The so-called collapsar model blames GRBs on the explosion - or supernova - of a massive star. This stellar swan song is presumably initiated by the collapse of the star's inner core into a black hole.

The model assumes that the collapse happens non-spherically - in which case, the core squeezes down like a pancake, while beams of matter blow out of the top and bottom. The beams, or jets, emit copious amounts of gamma rays, thereby generating a GRB.

According to Alex Filippenko of UC Berkeley, the collapsar model may require not only an asymmetric collapse "so that there is a natural axis along which matter can more easily squirt," but also a thin outer envelope "so that the jet doesn't have to pummel through a lot of material."

Type Ic supernovae may fit the bill, since the dying star in this case has lost its hydrogen and helium envelope due to a strong out-flowing wind or a greedy stellar companion.

Astronomers have recently observed several GRBs associated with Type Ic supernovae. But on October 25, 2003, a Type Ic, named SN 2003jd, went bang but had no burst.

Follow-up observations by both the Keck and Subaru telescopes in Hawaii did, however, reveal two high-speed jets - one moving towards us, the other going away. The fact that we see two beams means that we are not lined up with the axis - but instead are viewing from an angle.

The interpretation is that this event would have been seen as a GRB if we had been staring down the barrel of one of the jets.

"These observations suggest that the collapsar model is probably correct and that some of these Type Ic supernovae appear to be off-axis gamma-ray bursts, in which the gamma-ray burst is pointing in some direction other than Earth," said Ryan Foley, also from UC Berkeley.

Foley and Filippenko were among an international group of astronomers who observed the jet signatures in the supernova. Their results were detailed in the May 27 issue of the journal Science.