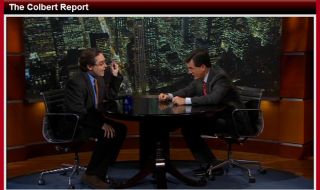 The government shouldn't tell NASA how to design a rocket, space historian Andrew Chaikin said this week on the Colbert Report.

Chaikin, author of the book "A Passion for Mars" and the Apollo history "A Man on the Moon" (on which Tom Hanks' HBO series "From the Earth to the Moon" is based), appeared on the humorous Comedy Central news show Monday (April 4).

"At times it's been more of a jobs program," Chaikin said. "NASA has gotten into a pattern of really big programs that suck up huge amounts of money with fantastic engineering, but it ends up being so expensive that it can't do anything else. Right now we have a situation where the Senate is literally telling NASA what rocket to build because of this jobs connection."

In Congress' 2011 NASA Authorization Bill, passed last year, U.S. lawmakers not only authorized NASA to build a new rocket, but dictated its precise requirements, including its lift capability and other specifications. The U.S. Senate has also aimed to add more stipulations about the new rocket in more recent legislation. NASA administrator Charles Bolden has pushed back against some of those requirements, saying the rocket prescribed by Congress isn't the right rocket for NASA to build. [What Obama and Congress Should Do for Spaceflight]

"The Senate is not exactly populated by rocket scientists," Chaikin said. "I wouldn’t be the first person to say that, except I mean it literally."

"I think Mitch McConnell has a degree in astrophysics, if I'm not mistaken," quipped Colbert Report host Stephen Colbert.

Chaikin said NASA should go forward with its new push to team up with the burgeoning commercial space industry.

"There are other options that are just emerging now," he said. "These guys at companies like SpaceX out in California — they have built a rocket that is capable of carrying people to the space station for the same amount of money that NASA spent on the launch tower for the rocket they were designing. So we've got to let that innovation take hold." [Video: How SpaceX's Falcon Heavy Rocket Flies]

Colbert said he was all for sending people into space, especially if they take precedence over robots.

"Robots — they already took over the auto industry. I don’t want them taking over the space industry," Colbert said.

Colbert has long taken an interest in NASA's spaceflight program, and even entered — and won — a contest to name a new International Space Station Module over him, after Colbert asked his many viewers to vote in the open online poll.

NASA overruled the victory, though, naming the module "Tranquility" instead. The space agency did bestow a consolation prize on Colbert, however, naming an exercise treadmill on the station "COLBERT," for "Combined Operational Load Bearing External Resistance Treadmill," in his honor.

Chaikin is also a former SPACE.com science editor. You can watch a video of Chaikin's appearance on the Colbert Report here.