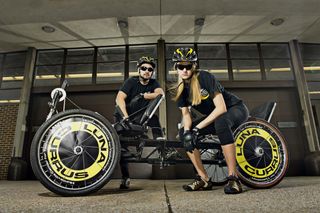 Racers from the Huntsville Center for Technology geared up for the Great Moonbuggy Race.
(Image: © NASA/MSFC/David Higginbotham)

They may not actually be driving on the moon, but 84 teams from the United States and three other countries are hoping they've got the right stuff to win NASA's latest rover race, a pedal-powered challenge to build the sleekest, fastest mock moonbuggy.

The two-day Great Moonbuggy Race kicks off today (April 1) at the U.S. Space & Rocket Center in Huntsville, Ala., where high school and university teams have converged to put their mock moon rovers to the test.  It's the 18th annual moonbuggy race held by NASA's Marshall Space Flight Center, but the 2011 contest comes in a landmark year for the agency: 40 years ago in July, astronauts drove the first car on the moon during the Apollo 15 mission.

"The event challenges high school and college students to design, build and race lightweight, human-powered rovers – 'moonbuggies' – which address many of the same engineering challenges dealt with by Apollo-era lunar rover developers in the late 1960s," NASA officials explained in a statement.

NASA will also hold a gala tonight at the Marshall Space Flight Center to welcome the moonbuggy teams and honor the engineers who designed and built the real Lunar Roving Vehicles driven by Apollo astronauts during the Apollo 15, 16 and 17 missions that explored the moon between 1971 and 1972. [Video: Going Off-Road on the Moon]

This year's moonbuggy racers includes high school, college and university students from 22 U.S. states, Puerto Rico, as well as Canada, India and Germany, with some team members hailing from Ethiopia, Pakistan and Russia.

"Their challenge is to deliver a two-driver buggy – usually in a three- or four-wheeled configuration – capable of posting the fastest vehicle assembly and race times, while incurring the fewest penalties on a harrowing course that simulates the harsh, rocky lunar surface," NASA officials said.

There are prizes for the top three teams with the fastest race times and fewest penalties, as well as extra awards for the lightest race vehicle and the best performing rookie team. The goal, NASA officials have said, is to inspire students of all ages to pursue careers in science and engineering through a real-world experience.

"Hailing from four continents, the aerospace talent of tomorrow comes together for this hands-on engineering competition," said race co-founder Frank Six, the university affairs officer at NASA's Marshall center. "More importantly, they'll come to meet one another, to turn school projects and shared dreams of spaceflight into lasting friendships and future partnerships." [Coolest Vehicles You'll Never Get to Ride]

The moonbuggy race began in 1994 with eight college teams and added a high school division in 1996. Last year, 70 teams competed in the NASA race. The 2011 contest begins at 7 a.m. CDT (8 a.m. EDT, 1200 GMT) and ends with an awards ceremony on Saturday afternoon, NASA officials said.