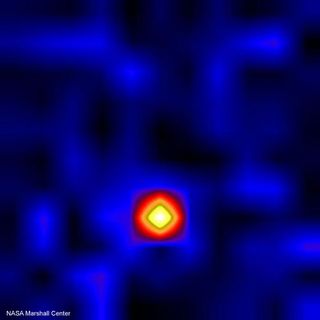 Black holes are some of the universe's most enigmatic and mysterious objects. Take a tour of some of the most famous ones in the cosmos. This image of the Cygnus X-1 binary star system is one of the first two focused high-energy X-ray images of any astron
(Image: © NASA Marshall Center)

The skewed light from near the well-known black hole Cygnus X-1 is revealing new details about the warped space and extraordinarily powerful magnetic fields close to it, astronomers find.

The black hole Cygnus X-1 – the first ever to be discovered by astronomers – is about 10 times the mass of the sun, 18 miles (60 kilometers) wide and 8,000 light-years away in the constellation of Cygnus, the Swan. It sucks gas away from a closely orbiting blue supergiant star, which super-heats as it spirals inward, emitting high-energy X-rays and gamma rays.

A great deal remains mysterious about the effects that the crushing gravity and extreme magnetic fields close to black holes have on space-time, matter and energy. Now, for the first time, scientists have seen polarized light from near a black hole, revealing key details about how Cygnus X-1 behaves. [Photos: Black Holes of the Universe]

When light travels freely through space, it can vibrate in any direction. However, light can get polarized, meaning it vibrates in just one direction, under specific circumstances, such as when it scatters off surfaces or passes through matter.

Using the Ibis telescope onboard the European Space Agency's Integral satellite, researchers observed Cygnus X-1 over the course of seven years. They concentrated on light generated in the black hole's corona, a relatively tiny region around the Cygnus X-1 that is less than 800 kilometers in diameter.

Past studies had seen X-rays from plasma heated to 216 million degrees Fahrenheit (120 million degrees Celsius) in the corona, but Integral had detected light from an unknown source there as well. [Video: Black Holes: Warping Time and Space]

"Our results have shown for the first time that this unknown high energy emission is strongly polarized, which implies that it should be produced by synchrotron radiation, a signature of a strong magnetic field at work close to the event horizon of the black hole" — essentially its edge, past which there is no return, researcher Philippe Laurent, an astronomer at the French Atomic and Alternative Energies Commission's Institute of Research into the Fundamental Laws of the Universe in Paris, told SPACE.com.

"People were thinking that theoretically a magnetic field could be there, but here is the first observational evidence of it," he added.

This powerful magnetic field close to Cygnus X-1's event horizon could be focusing particles rushing into the black hole into a jet away from it. "Our results could be the first evidence that this jet is launched in the vicinity of the black hole," Laurent said.

Since it emerges so close to Cygnus X-1's event horizon, this polarized light could yield insights regarding the physics close in, as well as properties of the black hole itself, such as its spin.

"There is no reason why other black hole binaries should not produce polarized light," Laurent added. "We should observe this phenomenon in many other systems, also may be outside our galaxy."

Laurent and his colleagues detailed their findings online March 24 in the journal Science.