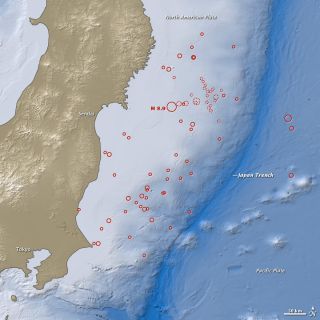 This map shows the location of the March 11, 2011 earthquake in Japan, as well as the foreshocks (dotted lines), including a 7.2-magnitude event on March 9, and aftershocks (solid lines). The size of each circle represents the magnitude of the associated quake or shock.
(Image: © USGS)

The massive earthquake that struck northeast Japan Friday (March 11) has shortened the length Earth's day by a fraction and shifted how the planet's mass is distributed.

A new analysis of the 8.9-magnitude earthquake in Japan has found that the intense temblor has accelerated Earth's spin, shortening the length of the 24-hour day by 1.8 microseconds, according to geophysicist Richard Gross at NASA's Jet Propulsion Laboratory in Pasadena, Calif.

Gross refined his estimates of the Japan quake's impact – which previously suggested a 1.6-microsecond shortening of the day – based on new data on how much the fault that triggered the earthquake slipped to redistribute the planet's mass. A microsecond is a millionth of a second. [Photos: Japan Earthquake and Tsunami in Pictures]

"By changing the distribution of the Earth's mass, the Japanese earthquake should have caused the Earth to rotate a bit faster, shortening the length of the day by about 1.8 microseconds," Gross told SPACE.com in an e-mail. More refinements are possible as new information on the earthquake comes to light, he added.

The scenario is similar to that of a figure skater drawing her arms inward during a spin to turn faster on the ice. The closer the mass shift during an earthquake is to the equator, the more it will speed up the spinning Earth.

One Earth day is about 24 hours, or 86,400 seconds, long. Over the course of a year, its length varies by about one millisecond, or 1,000 microseconds, due to seasonal variations in the planet's mass distribution such as the seasonal shift of the jet stream.

"This shift in the position of the figure axis will cause the Earth to wobble a bit differently as it rotates, but will not cause a shift of the Earth's axis in space – only external forces like the gravitational attraction of the sun, moon, and planets can do that," Gross said.

This isn't the first time a massive earthquake has changed the length of Earth's day. Major temblors have shortened day length in the past.

And the impact from Japan's 8.9-magnitude temblor may not be completely over.The weaker aftershocks may contribute tiny changes to day length as well.

The March 11 quake was the largest ever recorded in Japan and is the world's fifth largest earthquake to strike since 1900, according to the USGS. It struck offshore about 231 miles (373 kilometers) northeast of Tokyo and 80 miles (130 km) east of the city of Sendai, and created a massive tsunami that has devastated Japan's northeastern coastal areas. At least 20 aftershocks registering a 6.0 magnitude or higher have followed the main temblor.